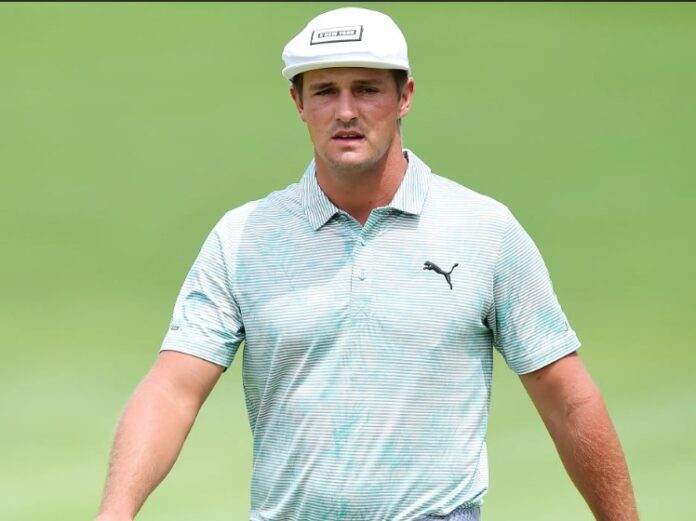 The world No 13 has ballooned to just over 17st (107kg) and gone up from a size medium shirt to extra large after pumping iron in the gym.

And he has seen the length of his drives increase massively, as evident by the gigantic 365 yard bomb he hit during the second round of the Charles Schwab Challenge.

That was just one of NINE drives over 300 yards during a second straight round of five-under 65.

His average drive now goes more than 320 yards – the longest on the PGA Tour by more than a yard.

DeChambeau – who gained 20lbs of muscle in lockdown alone – swings the driver at just shy of 140mph and the ball leaves his clubface at more than 200mph.

DeChambeau – who is known as the ‘mad scientist’ because of the complex way he plays the game – looks totally different to the skinny kid who joined the tour in 2016.

The 26-year-old has previously been blasted by followers and other players because of slow play.

But now he is turning into a fan favourite for his ‘grip it and rip it style’.

DeChambeau, who has five wins on the PGA Tour, swings out of his shoes on almost every drive now.

He says becoming a gym rat has increased the speed at which he swings the club.

So much so that he is using a driver with just 5.5 degrees of loft – that’s only around 1.5 degrees more than most putters.

Justin Rose was just one of those to notice the huge difference.

Asked about playing with DeChambeau, the 2013 US Open winner said: “He’s huge. I was 40 yards behind him.”

DeChambeau’s massive hitting has led to calls from legend Colin Montgomerie to introduce a tournament ball.

He told BBC Radio 5Live: “To see him carrying 330 yards in the air, this is getting unreal.