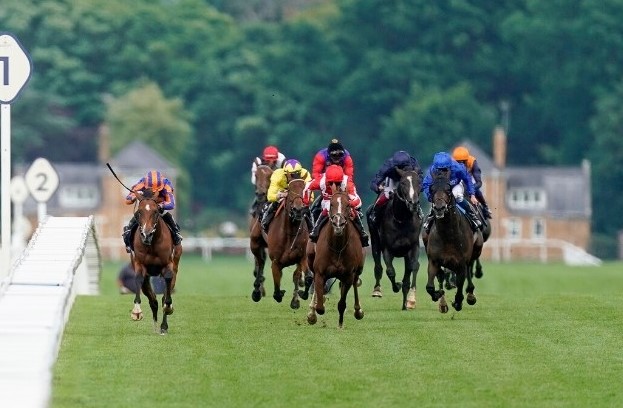 Stradivarius joined the list of those great stayers Double Trigger, Yeats, Ardross, Le Moss, and Sagaro with a fourth win in the Goodwood Cup….but not before trading at 3+ on the exchanges!

“I wasn’t expecting the race to be run like that,” admitted Dettori. “Santiago was the one I feared most. I was trying to get in front of him from the start but Tom Marquand already had that spot, so I had to drop back to get cover.”

“I got behind the wheels of Santiago and I thought, with 15lb less on his back, he’d kick early and make the weight count but it turned into a two-furlong sprint.

“I was worried when I was held in but once the split came I knew he was fine because his greatest weapon is his turn of foot – I don’t remember a stayer with a turn of foot like his.”

“If you want to sprint with Stradivarius you’ve got to be pretty good and, for all that I was boxed in for a furlong, once I got out he’s got too many gears. He’s all heart.”

Stradivarius’ trainer John Gosden said, “I was nervous and coming to the furlong pole I was hoping things would open but when the gap comes he has a turn of foot,”

“The one thing me and Frankie were clear about was to wait as long as we could and then pounce. We didn’t want a slog the whole way up the straight and I thought he rode him cannily. Thank goodness Frankie didn’t have a crowd to wave at this year.”

Moving one clear of Double Trigger as the first four-time winner of the Goodwood Cup, Stradivarius also boasts three Gold Cup wins, two victories apiece in the Lonsdale and Yorkshire Cup and a single success in the Doncaster and Long Distance Cups.

Trainer, jockey and owner Bjorn Nielsen are now in agreement he has nothing left to prove in the staying division and he is set to revert to a mile and half, with the ultimate aim to face stablemate Enable in what is shaping into a legend-defining Prix de l’Arc de Triomphe in October.

“Mr Nielsen and I have discussed it quite a lot,” said Gosden. “He has no problem travelling and quickening over a mile and a half and he will be freshening up now and going for the Prix Foy. If he runs a good race there he will go for the Arc.”

Gosden, when asked about the potential meeting with Enable in the Arc said, “She’s exceptional and the best mile and a half horse I’ve ever trained in my life and ever will, and he’s the best Cup horse. I’d say, if you got to a soft ground Arc, she’d go better than him, but I think he’d give her a race.”

Where would Dettori’s loyalty would lie come Longchamp in October. Gosden said he would not be getting involved in that one and, clearly not wanting to run up the connections of either horse, Dettori said, “I’m not going to try and put Bjorn off, if he wants to, why not? I’m on Enable at the moment but who knows? There’s the possibility that the ground becomes very soft which he doesn’t mind. He could possibly be her biggest threat.”

What lies beyond the Arc could also be fascinating, with Nielsen already considering running at seven, with one race and one race only in his thoughts.

“If he goes to stud, he goes to stud but I know Mr Nielsen is looking at one race next year,” said Gosden, “The Gold Cup is exactly what he’d be looking at. You can run a mile and a half and then go two and a half because he’s versatile. With the year we’ve had with this sinister disease, it’s nice to have old friends like him and Enable around.”

A look through the Haydock and Salisbury cards