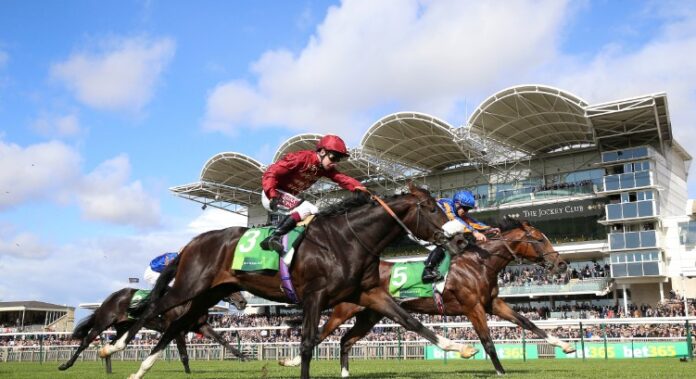 It really is decent racing this afternoon and hopefully we can keep the good work going. Post Racing subscribed members receive a Newsletter each morning, containing the names of horses that I have described as “market movers”, based on the criteria I apply to what a “mover” is.

Since Sunday this week they have received the names of 24 horses that qualified. They have seen 11 of those selections winning, producing a profit of £129.81

An Apprentice handicap at 1-45pm and it is SIX STRINGS they want….7/2 > 5/2….nothing else at all being punted against it.

A marathon at 2-50pm and nothing is being particularly well supported….I’ll bin this one.

I’m happy with my dutch in that one.

A mover and a half at 4-20pm! GARDEN OASIS….9/1 > 9/2….rates 9th best on my numbers but they bang the cheekpieces on for the first time today, and this one most definitely breaks from a prime draw. My second highest rated horse has been pulled out and the stable companion of that gamble should come into my dutch but, LITTLE TED is 4/1 > 8/1 and it’s a clear signal to me, they favour the other one.

The last time they applied first time headgear (blinkers), it won….lightening about to strike twice? In my dutch, for sure.

We have a very lightly raced 3-y-o in the 3-00pm, SPIRIT DANCER, now the horse for money. The 10/3 has gone, just 9/4 available as I type. He rates 10th best on my figures, simply because off three runs, he’s impossible to assess accurately….the market is now telling us what is expected. The OMM already advised is rock steady at 10/3 and the market is also telling me that my figures for this race look best turned on their head!

I must be a bit of a jinx right now as I have another top rated horse out at 4-00pm here. It has meant some minor adjustments to the tissue but I’m still seeing YOSHIMI as the “mover”, and was advised as such to Post Racing subscribed members this morning.

I said this about the 4-30pm in my morning Newsletter, “

I had one of those gut reaction moments prior to rating the 4-30pm up there and KING OF TONGA winked at me. I’ve had a feeling all season that David O’Meara has been getting him “handicapped”, running him in Class 2 and Class 3 races on ground at Ascot, that he would have hated.

He ran well from a bad draw at Chester, and then was beaten just over six lengths at Ripon, in a race his stable companion was meant to win….and did.

Last night I had spent over two hours watching the markets and the only mover was VICTORY ANGEL in the Ayr 5-00pm – 7/1 > 5/1 – and so I held back on everything, save for the news of the golf article I’d posted up on The World Of Sport.

I have got up this morning and those markets have been bouncing overnight and….KING OF TONGA – 12/1 > 11/2 – has also come out top rated. He has his conditions and if I’m right, expect a photo finish. He comes late and both wins to date have been by a head, and a nose….Danny Tudhope has to time this to perfection!

It all makes that race more interesting.”

KING OF TONGA continues to attract support, now 5/1, and my bet has already been placed.

I came away from Rating this race, happy with my figures. I’m not happy about the draw for my top rated though as I see high being disadvantaged and a definite preference for middle over low, high requiring snookers.

The market is telling me that BE PROUD, 11/2 > 9/2f, is going to run well. He is one of five beaten favourites taking this race in and with three of the front four on the tissue drawn low, I am expecting one of BE PROUD, AUTUMN FLIGHT or PRIMO’S COMET to win thise. I’m hoping it’s AUTUMN FLIGHT, because he’s in my top three rated horses!

We were all on CORMIER just over a week ago and he absolutely romped home. They aRE AGAIN ON….5/2 > 13/8….and only SPLINTER is being backed against him, 13/2 > 5/1. CORMIER is still officially 7lb well in here and will probably do another demolition job on this lot.

The market is telling that one of NASRAAWY / CRYSTAL PEGASUS wins the 2-40pm with CRYSTAL PEGASUS marginally the stronger on the tissue. Not a race I’m in a rush to punt, to be honest.

Everything is on the drift at 3-10pm so I’m seeing no reason at all, to get involved here, or at 3-40pm, where we have a four runner farce, the favourite trading 4/11.

VILLE DE GRACE is a very strong favourite at 4-10pm but they did come for AROUSING earlier, 11/4 > 5/2….however, that has dried up and you can now have 10/3. Moore/Stoute had a couple of winners yesterday and it seems they are set for at least another two, today.

Two have come out at 4-40pm and so we now have an extremely strong odds on favourite in AL SAARIYAH. Not a race I’m interested in playing, at all.

The second favourite has also been taken out at 5-10pm but one is being bet….WOVEN….4/1 > 2/1. Looks a weak race for a Class 3 but that one was a beaten favourite last time out and they seem to be trying to get that lost money back.

We finish at 5-40pm a Class 6 equivalent of a travel sickness bag. PRINCE CASPER was backed overnight and advised to Post Racing subscribed members 15/2 > 9/2….now 5/1, as they appear to have gone hot under the collar for SWELL SONG, 8/1 > 4/1.

I’ll possibly dutch that pair….most likely though, I’ll be putting the home made Lasagne into the oven.

Dundalk, Kelso, Doncaster, Lingfield, Navan and Meyday so something for everyone!