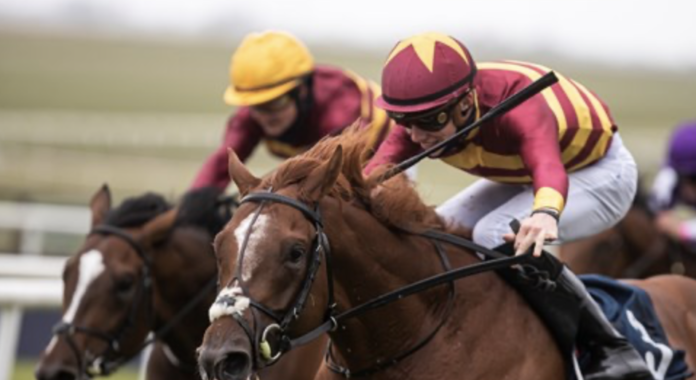 Eight races up there today, four of which have been Rated and so I’ll not discuss those in depth as my Post Racing subscribed membership have been kind enough to pay for those and how unfair would it be if I then told those not subscribing, the facts about those races?

12-20 – The morning OMM has drifted very badly and here I’d not be looking to make a profit from the three heading the tissue:

It is 10/1 bar that trio and everything else is drifting.

12-50 – A Class 5 Novice Chase and overnight nobody was paying it a blind bit of attention. Now though, we see things happening.

Two outsiders are being punted e.w. TOUCHEDBYANANGEL 12/1 > 9/1, and NOT THE CHABLIS 16/1 > 11/1 but here I’d simply be looking to get a 20/80 on the new favourite as he is ultra consistent and looks nailed on to hit the frame, clear round needed, of course!

1-20 – A Maiden Hurdle for 3-y-o’s and about as appealing for punting purposes, as needing a toilet whilst standing in the middle of the Kop during a Derby match.

This horse is lightly raced over obstacles, just seven runs to date, one win, which came over CD in January this year. I’m thinking that, based on the evidence to date, this one might need a little more juice in the ground, the win coming on good to soft and best placed effort on soft.

You might consider including it in a dutch four with my top three rated but personally I feel that morning mover will place at best.

2-20 – The OMM is very strong here and being rated ninth best on my figures would have to brought into a dutch four.

Another outsider attracting e.w. support is BUYER BEWARE, 20/1 > 10/1….this one won this race last year off a higher mark but is very inconsistent and had pulled up in two of its last three runs.

A winner of just four of the 54 races under rules to date, it hasp laced in 12 more so whilst it has a touch of the “slows”, it can be got ready to win. I’d be happy with my ratings and OMM….go with the early morning flow.

2-50 – FISHER GREEN has been taken out and that has led to market adjustments as opposed to moves. The OMM advised this morning, also my top rated horse, holds his spot and has to be considered “proper”. The market does expect a claiming jockey to win this race, three of the front four on the tissue ridden by one claiming 7lb, one 10lb and another 5lb.

Funny race, this feels….that McCain horse, BREAKFAST, running for the first time over obstacles in 749 days, second time following a win-op (ran last of 11 on the all weather at Newcastle a month back), and you just get the feeling this one isn’t here for a day out.

It sits fourth best on my figures and I’d have no reason to include it in my plays but if it was the one to scupper my dutch, I’d not be sat all surprised.

3-20 – A definite move is occurring here, THE NAVIGATOR 7/2 > 9/4 and those all around it weak in the face of this support. With the current favourite outside my top three and this support for the horse fourth best on my numbers, I’d be happy setting up a four horse dutch, my top four.

“It’s the last race on the card I’m finding intriguing though. A Bumper that has two OMM’s, one ridden by Richard Johnson, who comes here for just the one ride, and the other trained by Harry Whittington, who has booked Daryl Jacob and sent this one horse on a round trip of 734 miles….for a first prize of £3,249….but he’s sent two for Bumpers here before and both lost?

I’d consider dutching that pair if you must bet in Bumpers but there are one or two others in there , ROXANYA, for one, that could spog the plans of Mssrs Whittington and Hammond and I’d personally just watch.”

I have seen nothing to make me change my mind and it really is more one to watch.

The work is done, now it’s feet up, and enjoy watching the racing!