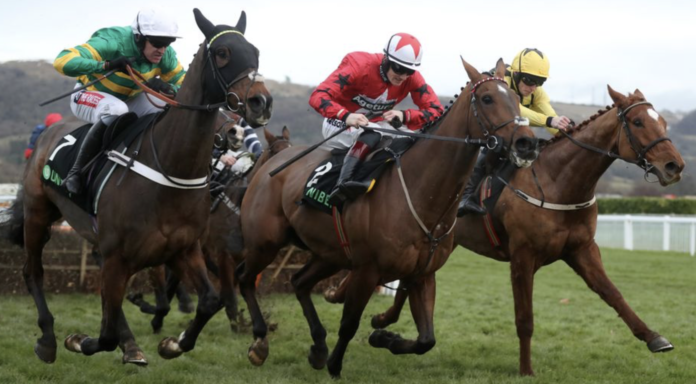 For a Monday we have some serious racing today and I’m especially looking forward to seeing SHISKIN attempt to follow in ALTIOR’s footsteps. I love working with Musselburgh and Ludlow, both tracks usually very kind to us. It’s a very early start today, with the first race going off before my elevenses have been finished!

11-35 – Nothing is drawing players in here with the front four on the tissue merely fluctuating so I’m going to suggest you ignore this race for punting purposes.

12-05 – RUINOUS was pulled a little while ago leaving just four going to post. That horse was third best on the tissue and so we’ve seen a shortening of the front two and the winner most probably comes from that duo. You can currently snaffle a 38% profit on the dutch.

12-40 – The OMM is now on the slide again as money comes for CREMANT 10/3 > 2/1. My play here would now see me dropping the OMM and introducing CREMANT into my dutch.

1-15 – I’m confident the winner is to be found in my top two rated and most likely my top rated so I’ll just pop my dutch on and see what happens.

1-50 – More than happy with my figures here and I do expect them to pop a profit into the bank. The OMM, which is also my clear top rated horse, is still very strong and I’m seeing further support.

3-00 – Division I of a Class 5 and the two OMM’s advised to Post Racing subscribed members this morning are still on the move and whilst one or two others are being sniffed around, I’m happy with what has been sent out and will work with them.

3-35 – We had an OMM in here and it trades at the price advised but what I’ve seen this morning suggests we now need to dutch, or play a second 20/80.

EMIRAT DE CATANA is 14/1 > 5/1 and whilst this horse could not have been found using Jodrel Bank without this move, one win from 14 previous starts and that in May 2019, and I’m assuming they tried the cheekpieces at home, turned it into BIG BUCKS and planned a coup. In eight starts since October last year, it has completed just four, fell in three and pulled up in another.

12-25 – If the market is right then LONG STAY wins cosy Odds on in Maiden Hurdles are as attractive as one of those carbuncles on the face of an old friend and I’ll just watch.

1-00 – A Class 5 Novice Chase with several attracting support and a race I’ll just let play out with no money passing between myself and the layers:

1-35 – Just five going to post and the players are currently non-committal here. SONNY CROCKETT is racing for Nicholls second time following a wind-op, opened 5/1, went 6/1 and has now been clipped in 5/1 > 9/2 > 4/1….ran on debut following a wind-op, finished 5th and not a Scooby Doo as to whether this thing has ability or not.

2-10 – The advice given this morning still stands. The market is indicating a potential to drop ROBINSHILL from the dutch E > 6/4 having also traded 6/5, 11/8….I’ll make my own decision closer to the time.

2-45 – We had an OMM here, still being supported, too. Money too for TOWARDS THE DREAM 8/1 > 9/2 with a fluctuating favourite in MR WASHINGTON.

That horse is not weak as such and it could well be a dutch pays off here, the OMM plus that pair named.

3-20 – The morning OMM is very much the one to be with, support still coming.

3-55 – Another race in which the overnight market spoke very favourably about one….but the morning market likes KABRIT 11/2 > 10/3.

The OMM is still being supported too and I’d consider a dutch, or an additional 20/80

A no bet race for me but intriguing.

2-00 – Nothing outside the front four on the tissue is expected to win this and of that quartet I’d be most interested in GETAWAY TOTHEROCK, who has been supported this morning 11/2 > 4/1.

2-35 – I advised Post Racing subscribed members of a right old mover here and it sits in my top three rated, too. It is still moving now, even as I type, it is shortening still further.

A previous CD winner he has his ground and is clearly expected to win today.

3-10 – This race was a conundrum this morning that I suggested we wait to work with. I’ve been all over this market like a bad rash and have a plan.

I got this wrong on Saturday but that’s decision making for you. I get some right, too.

Plain fact is, this is a little cracker of a race, ultra competitive but I’m very hopeful the winner comes from my top four rated.

3-45 – We end with a Conditional Jockeys’ Handicap, six going to post, and for sure the favourite, PISGAH PIKE is very strong. I’ll not be betting here.