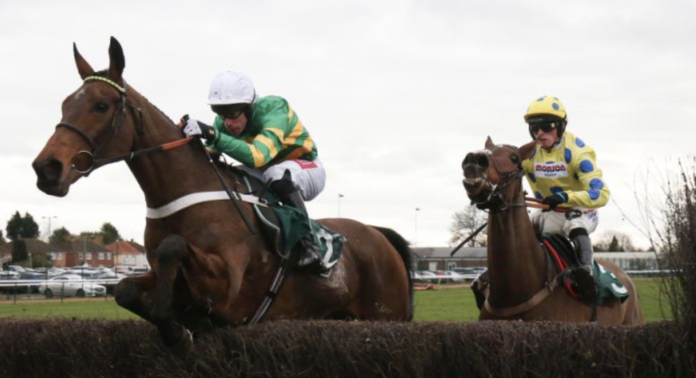 It really is dire stuff these last two days but yesterday proved the importance of making sure we are on top of everything, once that morning Newsletter has gone out to Post Racing subscribed members. Yesterday I wrote….”someone likes TRAVAIL D’ORFEVRE 25/1 > 12/1″….WON 7/1, and “I am seeing money here for an outsider, FRIENDS DON’T ASK 20/1 > 10/1″….WON 9/1

When I’m watching the markets we’ll see fancied horses pulled out, that leads to a market adjustment and I then try and spot those that go beyond that and are being played. I came close to getting this one right….

“2-40 – A Class 5 Handicap Chase and this morning I’ve seen the market adjusting as a result of the morning second favourite, ASKING FOR ANSWERS, being taken out.

If I were to point to one that looks more than a simple adjustment, it would be SLAINTE MHOR 16/1 > 8/1. Wears first time cheekpieces today, is totally unexposed over fences (just two runs), and if have a spare £2 I’ll have one e.w.”….2ND 10/1, beaten just half a length.”

Let’s see what we have today.

WHATSDASTORY is a strong second favourite and if someone could convince me to get involved here, it would be a dutch three, those two morning movers, with WHATSDASTORY.

1-00 – Nothing at all fancied here and other than to say they won’t let the Paul Nicholls trained GLAJOU get bigger than 9/4, I’ve nothing to report.

1-30 – It would seem one of my morning OMM or EARLY MORNING DEW wins this. The market was all about the OMM overnight but that Harry Whittington trained runner went 9/2 > 7/2 > 3/1….now 10/3 but the rest are drifting.

A 53% profit off a dutch is acceptable.

2-32 – My only rated race here today and whilst my second highest rated, who was also an OMM is now back out to it’s opening show, I’m seeing my top rated now receiving decent support. In all honesty it’s a race full of poor horses and if it were being run in my back garden, I’d close the curtains but, we have what we have.

3-02 – The morning OMM is exceptionally strong but a no bet race for me personally.

3-32 – Two OMM’s and the strongest of the pair is the second named in the morning Newsletter. It is the only horse attracting support now and that will be my own 20/80.

12-20 – An all weather Bumper to kick off, before they put foot on what will be a bog of a turf track. Down to six runners and only two fancied on the tissue, BRILLIANT PRESENT / TAYLORS THREE ROCK….the third favourite is 11/4 > 5/1 and totally unfancied. A 27% profit off a two horse dutch in what appears to be a match…acceptable to you? Like Ruby Walsh said on Sunday after ENVOI ALLEN had won at 2/11….”I wouldn’t have got that interest had I put my money in the bank for a day”

12-50 – An incredibly strong OMM….despite the adjustment following the withdrawal of GRACES ORDER, who was second favourite. Not a race I’ll play.

1-20 – ITSONLYROCKNROLL is the one drawing the players in, 7/2 > 11/4….but this horse has been a mover before and dipped out. Just two wins under rules and only one over hurdles to date, from 22 attempts. Not many leave Willie Mullins and go on an upward trajectory and whilst the £16k Chris Gordon paid for the horse has given then some fun, they ain’t got a “winner” on their hands….this is a seriously weak race though so it might be the horses one a year!

2-23 – My only rated race at this meeting and my top rated looks the one but I’m still seeing plenty of money for the OMM advised this morning. My own play here now will be a dutch, rated horses 1 & 4.

2-53 – A Conditional Jockeys’ Veterans race and they have taken the morning joint favourite out so mainly adjustments although, RAVEN’S TOWER 9/2 > 3/1 is more than an adjustment. It was never a race that interested me for punting purposes though.

3-23 – A complete novelty race, four runners, over hurdles, ridden by flat jockeys. LITTLE RORY MAC is 7/4 > 11/8 but why anyone would want to have a bet on such a race is a mystery to me.