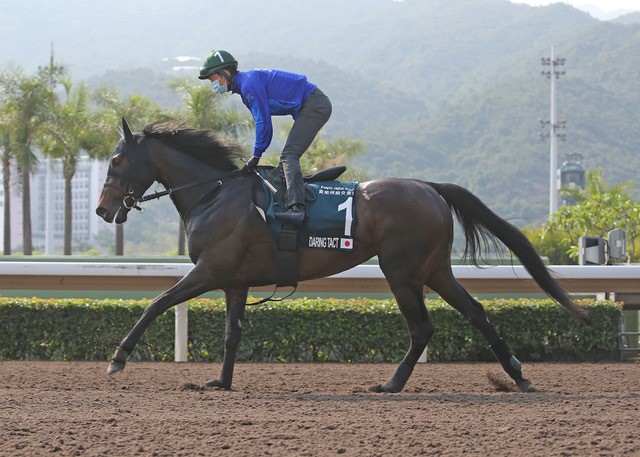 This time most years (not 2020, obviously), I have written this from either the press room at Sha Tin racecourse, or my hotel room in the bay – sadly, once again I am conspicuous by my absence, much to the annoyance of the local bars and restaurants, but the racing goes ahead in Hong Kong and remains of the standard expected at perhaps the most well-funded and organised racing jurisdiction we can only dream of here in the United Kingdom.

I don’t suppose any one will fall over in shock when I tell you that there are far less “foreign” challengers for the big races than would normally be the case, but covid makes that fully understandable and with the media unable to attend in numbers, there will be a slightly muted feel to the weekend, but we mustn’t let that take anything away from the horses or their connections.

For those new to the idea of following racing from abroad, I have been championing racing around the World for many years now – although it is easy to assume we are the biggest and the best, that is not necessarily the case, though the differing seasons invariably make it close to impossible for the very best to take each other on to see who comes out on top. Personally, I am convinced the very best jockeys ride in Hong Kong (name me better riders than the likes of Zac Purton, Joao Moreira, Chad Schofield and so on), and I so so wish they came here to prove their merits more often – but one look at our prize money compared to theirs, and why would they bother. For those even considering a trip to watch horse racing elsewhere, I recommend Chantilly in France (more than Longchamp), Keeneland in America, Durban in South Africa (especially for the Durban July meeting), and both Happy Valley and Sha Tin in Hong Kong – for starters. I can’t and won’t pretend they have the variety of track we are used to over here because they don’t, but the racing is always competitive, the horses of the highest quality, the betting vibrant and competitive, entry fees and food affordable, and most importantly, you will get a very warm welcome – racing fans are the same the world over, though do expect a lot of hustles and bustle when full crowds are in attendance and you are trying to get a birds-eye view of the main races.

On to the racing this weekend, and before I get things wrong (almost assured), a personal thank you to the Hong Kong Jockey Club who have gone above and beyond to make sure we are kept well informed however many miles away we are from the work mornings. Gallop reports, videos, photographs, trainer interviews and jockey comments have been arriving on a daily basis while I also have contacts “on the ground” among the local media, though whether that gives us a winner or two, only time will tell.

Just the six furlongs for the sprinters here and if there is one aspect of racing where we are seen to be lagging behind the rest of the World, this is clearly the discipline concerned. We aren’t represented of course, but nothing we have would live with the likes of Damon Smash or Wellington regardless, though it does look pretty open if you are brave enough to look past the favourite. The decision to be made for punters here is whether they want a win bet on the jolly or a bigger priced option to hit the frame, so I am giving you both. Barring a tardy start of bad luck in running it is close to impossible to oppose the Japanese raider Danon Smash, who won here in December under Ryan Moore (Joao Moreira on board here), and finds a weaker field, on paper at least, in opposition. If I can see a chink in his armour it could be a possible lack of early pace as he likes to attack fast and late when the opportunity arises, though his trainer (Takayuki Yasuda) has suggested he now compares with the great Lord Kanaloa as he matures, and if that is the case he will take some stopping here. Anyone can pick a favourite I’m afraid, so those looking to play at a bigger price could be interested in Wellington as an each way or place only alternative. They think a lot of him at the Gibson yard, and although off his game when only fifth here last time out when sent off the favourite. A high draw saw him forced to give away plenty of ground throughout while I felt he pulled too hard for his own good which also diminished his chances, but a three draw this time around will be more to connections liking. A slight look back shows us he matched Sacred Kingdom’s course record time two races back which catches the eye, and if he can get back to that kind of form he looks a shoe in for a top three placing and a payout for his each way supporters, including me.

If I said this wasn’t a disappointing field I would be a liar, though that looks more down to a lack of International challengers and local superstar Golden Sixty who has seen any would be winners diverted elsewhere, than the prestige of the race and the amazing prize money of over £1 million to the winner. Odds on is not a lot of fun for anyone but the jolly is awfully hard to oppose as the five-year-old year-old son of Medaglia d’Oro looks to make it win number fourteen on the bounce after his last success when taking the Gold Cup over ten furlongs by a short head. His supporters will need to try and stay calm throughout as he invariably does things the hard way, but he is impossible to oppose in this field regardless. I can’t honestly suggest a bet at odds of 2/5 without being laughed at so I advise sitting back and watching but if you have to get involved, then a forecast with More Than This could surprise, relying more on jockey Joao Moreira than any complicated form lines.

With a lack of space necessitating a lack of a breeding industry in Hong Kong their horses are invariably gelded and stay in training far longer than ours, meaning plenty of old favourites turn out in these valuable events, though whether they are past their prime is another question. I guess Time Warp and Exultant fit that category at the age of  eight and seven respectively but we mustn’t be fooled – age is not necessarily the trump card and I am hoping both will come back safe and sound without disgracing themselves. The field of seven will hopefully mean trouble in running is less of an issue than it could have been, negating hard luck stories and allowing the best horse to come home at the head of the pack, though which of the Japanese raiders will come home in front seems the only question.  Sadly, Glory Vase was found to be slightly lame this morning (Thursday) leaving his participation open to question, and pretty much forcing me to suggest Daring Tact as another winner on the day for Japan.  Still improving at the age of four, the filly gets four pounds from all but one of her rivals here, yet her overall form profile suggests that is just an added bonus and not necessarily needed. Japan’s Champion three-year-old filly in 20220 after winning their fillies triple crown, she ran her best race eye when a length and a half third to Almond Eye and she holds Glory Vase and Kiseki on that form. Unlucky last time out on soft ground when failing to run down Gibeon in the Kinko Sho at Chukyo she will be spot on here and the more I look, the harder she is to oppose. Loves Only You ran well when third in the Dubai Sheema Classic behind Mishriff, and she can also get involved for an expected Japanese one-two-three, with Daring Tact by far the likeliest winner if repeating her better form.

Away from the group races I do feel I have a couple of others well worthy of consideration, though naturally have zero ideas about the prices at this time with our bookmakers basically ignoring the undercard. Joao Moreira is keen on the chances of both Gallant Express 9.25am) and Courier Wonder in the 10.50am, and they both look on an upward curve with even more expected. I will be backing the, both as things stand, though if the prices are too short then a win double may be the play of the day?

Fakenham off! No, not an expletive, it’s off!