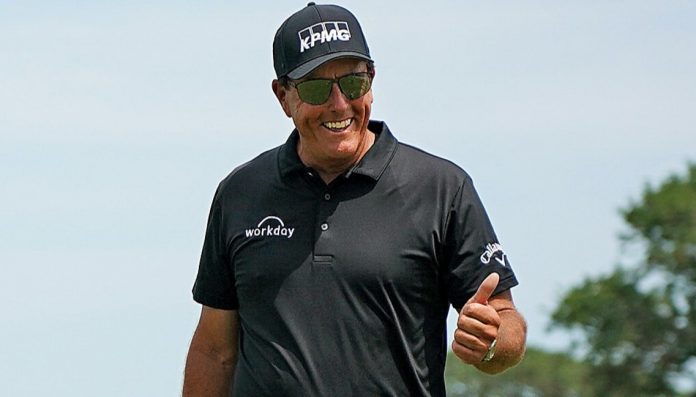 Phil Mickelson had not won a golf tournament since 2019, and he hadn’t landed a major championship trophy since winning at Muirfield in 2013.

Since September he had not made the cut in six tournaments and in the eight in which he did play at the weekend, he was not in the top 20 finishers and he had fallen out of the top 100. He had actually started needing special exemptions, just to play a major. Recently he had been talking more about playing the PGA Tour Champions, where those “crusties” aged 50 and over meet to put on some kind of a show.

He had been more interested in selling his own brand of coffee (Coffee For Wellness), than winning at golf in recent times.

Plain fact is, when you have a God given talent, the class is always there, even if the form isn’t. Tiger Woods went five years without a win, and 11 between majors. If you’ve got “it”, you’ve got “it”. This was Mickelson’s 45th win and his sixth major and he most definitely has “it”.

Last month he was quoted as saying that his greatest feeling of accomplishment came when he won at Muirfield because that kind of golf didn’t suit his game. I’m guessing he’ll now revisit that comment.

Very few golf bettors would have even considered him….but some did. William Hill, through their Caesars Sportsbook, had him 200/1 and others 300/1. Mickelson became the first golfer since Louis Oosthuizen to win at odds of 200/1, and he did that way back in 2010 when he won the Open Championship.

Someone had $100 with Hills over there and he produced a losing book for them overall. Nothing like as bad as when Tiger won the Masters (that cost them over a million), and reading of other bets placed on “Lefty”, one guy had $1000 with a company over there called DraftKings, which netted that New Jersey punter $300,000

Sometimes it really does pay to stick with the class acts!

A word about the joint runner up yesterday, Brooks Koepka. In March he was on holiday with his family, when he slipped and had to undergo surgery to have his kneecap put back in place. He should not have even been there last week, as his doctors told him he is still half a year away off being fully recovered. He could not use that knee to get over his putts as low as he would have liked and that saw him take 27 putts on the final day, ranking him 59th on the greens last weekend.

Like he said himself, “it felt like tap-ins I was missing for three days. I never felt comfortable and you are not going to win anything if you do that”

He’s a sure-fire winner again, once that knee is “right”.

“WE’D TRAIN HIM AS A GUINEAS HORSE NOW”