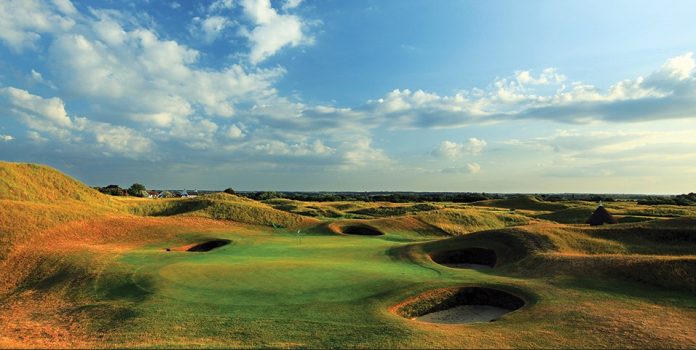 Close but no cigar last week with a couple of bad holes ruining our chances, but that’s the same with my golf (only its one or two good holes I suppose), and the frustration of the game both as a player and a punter. This week we stay this side of the Atlantic for a change with the 149th British Open at last, one year later than planned thanks to the dreaded covid.

Held at Royal St George’s for the first time since 2011 when Darren Clarke won it (where do the years go) and for the fifteenth time overall. Henrik Stenson holds the record in the Open with a final score of 20 under in 2016, but that will not be threatened here by any stretch of the imagination and I expect a winning score around the -6 mark at best, depending on the weather. Trees are conspicuous by their absence here leaving the course wide open to the elements and as we all know in the English summer, all things are possible. A par 70 measuring in at 7,206 yards the players will need to contend with some tricky fairways, punishing rough, and difficult greens, but with pretty much all the best players in the World on show, we can still expect some amazing golf – as well as plenty of frustration. Personally, this has been one of the more difficult tournament to even try to call – I could have had at least six more picks but common sense suggests I could have 20 – and still not find the winner, so at least this way we keep life sensible and limit any potential losses.

***NOTE*** Different bookmakers are offering different each way terms so do shop around – and make sure you only partake non-runner no bet – covid has seen last minute withdrawals all season and we don’t want to be throwing money away. DO shop around for best odds and best place terms and any special offers with the bookmakers to steal the most value. ***NOTE 2*** Paddy Power are offering 12 places, and William Hill 11 so I will be focussing my attentions there.

The South African is way overpriced at 50/1 in my book, and although no good thing, he was always going to be top of my (small) list. He finished in the top ten in 2017 which would be good enough to land the place parts of our bets again here, but more importantly he was the first man ever to card a 62 in a major that day which shows his true abilities. His putting is as good as anyone on the tour, and he will handle any windy conditions better than most – all in all his skillset looks best suited to this track and I expect a decent effort at a huge price with his links record second to none.

Kneesy does it for Brooks here with his knee injury my biggest concern. To be fair, he has looked over that recently with a second in the USPGA and a fourth to Jon Rahm at Torrey Pines, suggesting he is most certainly back to his best. His focus is only on the bigger events which isn’t a bad way to be, and I was reading that he is 84 under in all his Majors since 2016, 60 strokes clear of anyone else in that time, which makes impressive reading. Three top-ten finishes in six Opens adds to my confidence as well as his, and as he ranks tenth in Strokes Gained off the tee, 10th in Strokes gained for approach shots and third for Stokes Gained tee to green I am more than happy with my selection – especially when you remember those stats include five missed cuts while carrying his injury.

For reasons unknown the popular Australian comes alive at the Open with a fifth in 2014, a play off defeat in 2015, and a sixth in 2017. His fifth at Augusta this year was his first top-ten in a major in three years suggesting he is back to his best, with a good third in the Travelers (including a round of 64) since, and more importantly, his driving is improving out of all recognition. Recent TV interviews suggest he feels in a very good place with his game at the moment and that is all important in competitions of this quality, and better still, he loves Links courses, and at 50/1, I am hopeful of a very big effort if the winds blow as expected.