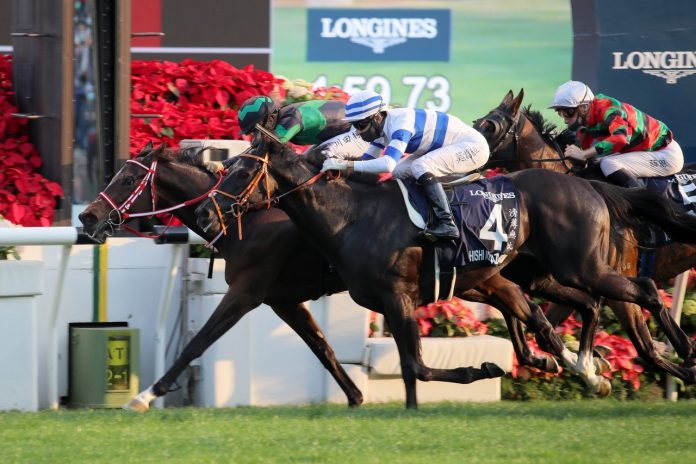 It’s that time of year again, and when I have finished cursing the dreaded covid that has seen me missing out on travel to the best race meetings in the World, I am still a huge advocate of International Racing, and owe you all a preview of the big races at Sha Tin in Hong Kong this Sunday.

Once again I will plea with you to visit when or if you ever get the chance – the racing is top class (please do not be fooled in to thinking we are the only ones who can put on the very best equine events because believe me, we pale in to insignificance), and I want to start by wishing my colleagues (and I feel friends) at the Hong Kong Jockey Club the very best on Sunday.

What I can say is, they are making sure everyone is safe (or as safe as possible), with no expense spared when it comes to safety.  There is a VERY stringent “Racing Bubble” with full PPE being worn by all the staff and enforced social distancing (as you would expect), all necessities to allow the participation of the International raiders I will discuss below, and hats off (as usual) to the Hong Kong Jockey Club who have no doubt been in length discussing with the political entities to do whatever was necessary to let this meeting go ahead.

Naturally, I am coming at this from a European viewpoint and will be focussing primarily on their chances in the big races, but that doesn’t mean I will come out in their favour each time, with local and Japanese raiders holding sway in recent years. This is a festival, a party, and n masterclass in jockeyship each and every year and these guys know how to put on a show (fireworks, bands, the lot), though the racing is a very high standard as well – though what would you expect with that sort of prize money on offer?

Glory Vase took this for Japan in 2019, and Mogul last year for Aidan O’Brien and they are both in opposition this season, looking to land this Group One prize and the small matter of £1,076,487 to the winner – nice work if you can get it. What they have in theoir favour is course and distance experience, and clear evidence that they can travel to Hong Kong and give their best, and that stands them in good stead when it comes to looking deeply at this race. Of the two, I suspect Glory Vase will come out on top after his two-length third in the Sankei Show at Nakayama in late September, while mogul has looked a long way short of his best recently with a four-length sixth in a Group Three at Deauville looking a long way short of what is needed here. The horse I will side with though (heart rules head) has to be Pyledriver, trained by William Muir and Chriss Grassick, and to be ridden by fellow Evertonian Martin Dwyer. His best form includes a win at Epsom in the Coronation Cup in June and a prep run over an inadequate ten furlongs at Lingfield, and if he is at his best, I feel he is the one they all have to beat. He has look ether part in his trackwork according to my reliable sources who are lucky enough to be trackside in the mornings, and if he is at his best, then the 2/1 may look good value yet as they flash past the line (good luck Martin).

We don’t have a runner here meaning I have a completely free hand, though I only wish that meant I was confident of finding the winner. Danon Smash won this last season and deserves plenty of respect, but he was five lengths behind Pixie Knight at Nakayama last time out and although drawn better here, it is still hard to see him reversing that form. The Japanese raider does look the clear form pick on that run, but I am intrigued to see Ryan Moore teaming up with Hot King Prawn, and he could go well at a big price (18/1 as I write).  Once seen as the next big thing on the Hong Kong racing scene, his career hasn’t panned out quite as expected, yet he has still  won 12 career starts and over £3,000,000 in prize money, and he may yet add another £1,291 million to the kitty here. He rarely runs two races the same, hence his price, but he did win the Group One Centenary Cup here in January, and is expected to strip fitter for his first start since march when beaten four lengths on his return. Ryan may (or may not) be able to bring out the best in him, and at that price a little each way may yet pay out.

No money to be made here (unless you include him in multiples) as Vincent Ho looks to have little more than a steering job on Golden Sixty, who is looking for his nineteenth win on his twentieth start, which is some record. He is a machine, and he will go off heavily odds on here, but if you are looking for an each-way alternative I point you to Mother Earth.  Aidan O’Brien’s filly gets her 5lb filly allowance here which is a bonus, and although comparing European form to International form isn’t easy, she has to have place chances at least (and at 16/1). The winner of the English 1000 Guineas at Newmarket in May, she has had a long hard season which is a concern, but with three Group Ones wins to her name and seven places, she has each way written all over her. Add Ryan Moore in the saddle and the fact that she has proved she travel well with a second in the Breeder’s Cup as a juvenile, and you can hopefully see why I think she has her chance – even if her price tells me otherwise.

By now I suspect you are seeing a pattern emerging, and expect me to go for Bolshoi Ballet here, but good as he may be at his peak, I cannot see him winning this. He was the next big thing off the Ballydoyle production line in the spring, and has won three times this year, but he just looks a touch short of the class needed, even at his very best.  Mac Swiney won the Irish 2000 Guineas and may well prove best of the Irish raiders, but he was one place and a length and half behind runner-up Dubai Honour last time out in the Champion Stakes at Ascot, and he may come out best of the European raiders here. The William Haggas trained son of Pride Of Dubai is still improving with every start and came very close to being my suggestion here, but in the end I came down on the side of Loves Only You (2/1), though I do not like her price one iota. A rare Japanese Breeder’s Cup winner last time out in the Filly and Mares Turf, she has also run well in Dubai when a half-length third to Mishriff, and won here over course and distance as recently as April in the  QEII Cup, evidence if any were needed that she is a better traveller than most.  Her form stands up to the closest scrutiny, and although no “good thing”, she is the sensible call to land the £1.6 milliion or so first prize in the biggest and possibly most important race of the day.

Hot King Prawn each way 6.40am

Mother Earth Each Way 7.50am

Gambon gamble landed yesterday, but what of today?