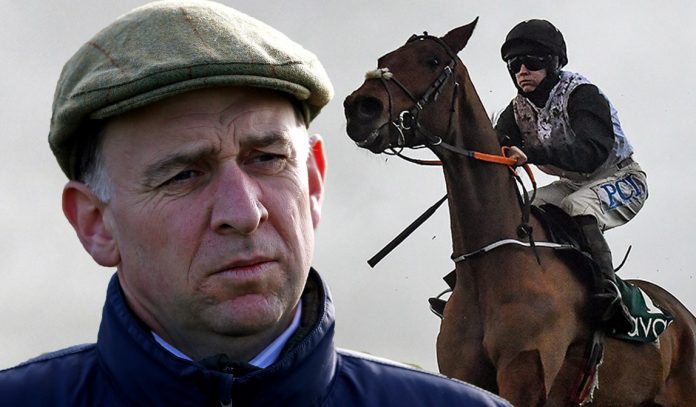 I put this lot together before the rains arrived and it’ll be a miracle of Ark proportions if we get out unscathed!

Stats: Seven-year-olds dominate with seven of the last 10 winners, followed by six-year-olds (three) and eight-year-olds (one).  Three winning favourites and one co-favourite, and only the one winner at a double figure price back in 2013. 7-3 to the Irish with Willie Mullins training four and Gordon Elliott two (plus  A J Martin). Yeats, Voix Du Nord, and Robin Des Champs all sired two of the last 10 winners.

Thoughts: Four runners is frankly embarrassing for a Cheltenham contest and two joint favourites at Evens makes it even worse. Somehow, all the Mullins hype has seen Bob Olinger arrive here as almost the forgotten superstar, but he has done precious little wrong with a second to Ferny Hollow in a maiden hurdle his one and only defeat from eight career starts. The winner of the Ballymore Hurdle here last season by eight lengths, he has switched to fences this season with easy wins at Gowran Park and Punchestown as it became glaringly obvious this was his season’s aim. He has barely touched a twig so far which is a promising attribute to have, and although main rival  Galopin Des Champs has won impressively by wider margins, this will be a his toughest contest yet in a fascinating match up.

Thoughts: I am not as big fan of three handicaps to be honest but all the above stats seem to point to the each way chances of Sassy Yet Classy. Eight years old (tick),rated below 150 (tick) ran in the last 90 days (tick), trained by Gordon Elliott (tick), and ridden by Davy Russell (tick). A winner over three miles on his return at Punchestown, he unseated early doors at Navan and got within a neck of the winner over an inadequate two and a half miles back at Navan when finishing fast. This is his trip, and he looks overpriced to me.

Stats: Five all between the UK and Ireland here which makes a change, though Willie Mullins has won four in total, including the last two. Seven-year-olds have won six, eight-year-olds two and nine-year-olds the same, and we have seen five winning favourites as well (50%).

Thoughts: I made the error of opposing Honeysuckle based on her price on Tuesday and I won’t be making the same mistake here, with Allaho by far the likeliest winner. He won this last year and I see no reason why he cannot double up as he arrives here in good form after winning at Punchestown and Thurles on his last two starts. He ownt be much of a price, and if you fancy an alternative I suggest Shan Blue may try to make all and get them all off the bridle dropping back to this trip – he couud go well at a big price but I doubt he can hold off the attentions of the odds-on jolly.

Stats: Oscar was the sire of two of the last three winners with different horses. Every winner of this race who completed on their previous start came home in the first four, and all carried 11 stone 10. All winners came from the first nine in the betting, and the UK arrive here with a 6-4 lead over the last 10 years, with three short priced favourites winning in the same timescale – and other winners at odds up to 50/1.

Thoughts: Heart rules head time, simple as that. Ten-year-olds do not win this, but if no-one tells Paisley Park, I see no reason why he can’t go close – assuming he is in “the mood”. Last time but he decided not to race for long enough to give a class field a head start in the Cleeve hurdle, yet once he motored he got involved before running away from them all for a very easy victory, and in a decent time to boot. Royal Kahala could go well with her mare’s allowance if you want one at a bigger price, while Flooring Porter is fancied by the Irish to follow up last years success, but I will be sticking with my original selection – each way, of course.

Stats: Winners at all odds and all ages here, with the score 6-4 to the home team. Only one winner has carried more than 11 stone 4 in the 24 years covered, and none rated higher than 151. Three winning favourites from the last four is a positive for jolly backers, while Shantou has fathered two of the last eight to come home in front and is a sire worth looking for.

Thoughts: If I was allowed I would just write “no comment” here, it really is a race akin to a cold shower to me – an absolute turn-off.  I do think Adrimel could run a big race for a 33/1 chance but making all at Cheltenham isn’t the easiest thing to do, and that is his preferred racing style. He might, just might, hang on for a place, but the Hobbs trained Celebre D’Allen may land the odds for those who like one nearer to the head of the market. He has won all three starts since arriving from France, and may have more to offer. He won easily enough last time out to suggest there may be more in the locker, though an added 6lb from the handicapper will make his life that little bit harder. My only other advice would be to watch the markets and see if the Irish come for anything last minute as I suspect they will have something that has got in under the radar.

Stats: Just the six runnings of this race so very little to go on. The Irish have won them all with Willie Mullins taking the first five, the first three with odds-on favourites but we haven’t seen a winning jolly since. Four five-year-olds were followed by two six-year-olds, but that is all we have to go on I’m afraid.

Thoughts: Love Envoi is overpriced here at 14/1 for an unbeaten horse and she could go well for Harry Fry, a trainer on the up and up. A place may well await her here, but all the word out of Ireland has been about Dinoblue here. She won her only start over hurdles in a hack canter and has been pointed here ever since – if she is as good as they think she is then she will win this easily before bigger and better races await next season – perhaps a match up with Honeysuckle and Constitution Hill in the Champion Hurdle 2023, they think she is that good?

Stats: Five all again for this one so either the Irish or the home team will take a lead this afternoon, but the Irish have won the last three. We had a winning favourite in 2012 and again last year but none in the years between, while Gordon Elliott has won two of the last six (three if you include Mount Ida for Denise Foster), and Jamie Codd has ridden two of the last seven winners. You need to be seven or older here (all of the last 24 winners), and we are yet to see a winner rated over 143 which is interesting looking at the early prices.

Thoughts: The day doesn’t get any easier does it? Frontal Assault heads the early betting and seems sure to go well, and School Boy Hours is on an upward curve and was my early fancy – but 7/1 looks too skinny on what he has actually achieved so far. As you may have worked out, if in doubt get the stats out, and they point to the each way chances of Smoking Gun, Jamie Codd for Gordon Elliott and fitting all the other conditions as well. 8/1 looks tempting and h has won over three miles five, suggesting this trip will hold no terrors. Third but beaten less than two lengths at Fairyhouse last month, he races off the same mark of 138 here and has to have an outstanding chance of a place at the very least – assuming a clear round.

FK Sochi and Rostov to draw and BTTS