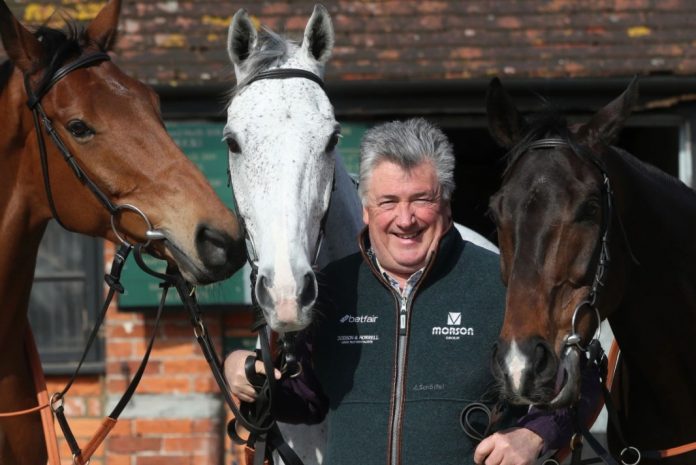 A lovely winner yesterday and you only need one or two of those a week to keep the bailiffs away from the front door. Hopefully we end this Festival with a bang and my selections today are….

Thoughts: The Milton Harris trained Knight Salute would be a far shorter price were he in a more fashionable yard and he can go well as he looks to keep his unbeaten record intact. Porticello would be a popular winner with me as a big fan and friend of trainer Gary Moore, but the Irish simply will not hear of defeat for Vauban here, and who am I to argue. Second to Pied Piper first time out when many felt he should have got the race in the Steward’s room, he went one better at Leopardstown on his on other outing and connections are adamant that Pied Piper will not beat him again. As a lowly scribe, who am I to think I know any better (I don’t), and I am hoping we can start the day with a winner for a change.

Thoughts: I agree with everyone that State Man could be anything after winning his maiden hard held last time out, but three career starts, falling in one of them, suggests he he may not have the experience for this contest. At a bigger price, I do like the chances of the Nigel Twiston-Davies trained I Like To Move It, who may not have reached his peak yet off a mark of 142. Although I suspect he may have more to come as a five-year-old, his form already gives him an outstanding shout with wins at Warwick and twice here at Cheltenham, and he was far from disgraced when last of five to Jonbon, beaten 14 lengths at Ascot and the winner was a good second in one of the best Supreme Hurdle’s of many a year. He has got soft ground form which he will need (I’d prefer heavy ground form but you can’t have everything), and he should go well at a double figure price.

Stats: At Fishers Cross won at odds of 11/8 in 2013 but he was the only winning favourite in the last 10 years with Vanillier winning at 14/1 last year and others at odds up to 50/1. All bar one finished in the first four last time out, while six and seven-year-olds have won 14 of the 17 runnings so far. All bar one also raced in the last 90 days. Martaline has been the sire of two of the last eight to be successful. Current score – 6-4 to Ireland.

Thoughts: Stag Horn was very decent on the Flat, reaching a rating of 108 at his peak, and he hasn’t done anything wrong over hurdles either with wins at Hereford and Warwick and although this is s step up in grade, he has a touch of class about him. He has won on soft ground which is a big bonus, stayed two miles two on the flat suggesting this trip will be no issue to him, and is certainly overpriced at 14/1 for us each-way players. The Nice Guy is a horse I have been following so sod’s law suggests he will be the winner here if I don’t back him, while Ginto has done nothing wrong so far, but looks a touch too short for me to open my wallet.

Stats: Current score 6-4 to Ireland after the last three in a row. Three winning favourites from the last 10, six winning eight-year-olds (two aged seven and two aged nine), none fell last time out and only one was pulled up. All bar one winner of the last 24 raced in the previous 90 days.

Thoughts: I am supposed to be getting excited over the big race of the day, but when you don’t have a strong opinion that gets more difficult. Every time I look at this race I change my mind, though three horses do keep coming to mind – so I might as well name them all before making my decision. Galvin stayed on well to get past A Plus Tard last time out and I see no reason why that form should be reversed for starters, while my second horse won this last year (Minella Indo), and I am confident the De Bromhead yard will have him spot-on now as he looks for a follow-up. Either could win this, but with the recent rain, I will take a chance on Royal Pagaille. Trained by Venetia Williams whose horses seem to love these conditions, he has given his best on testing conditions, and could give jockey Charlie Deutsch an even more memorable Cheltenham after the win of L’Homme Presse on Wednesday.

Stats: 6-4 to the Irish yet again, and although there have been three winning favourites, we have also seen winners at 66/1, 25/1, and 16/1 (last season). Seventeen of the last 24 winners finished in the first three last time out.

Thoughts: I can certainly see why Billaway is at the head of the market if mainly for the Mullins factor, but I have been talking up the chances of Dubai Quest for months now and it would be disloyal of me to change my selection. The winner of his last seven starts, two under rules and five in point-to-points, he has the assistance of Gina Andrews in the saddle who has ridden him to six of those victories, and that is a real positive in these races when jockeys are often seeing their mount for the first time on race day. He only has a few pounds to find with the jolly according to official ratings, and at 14/1 or bigger he looks an outstanding each way option.

Stats: Nothing to mention here after just the one run when Colreevy won at odds of 9/4 for Willie Mullins.

Thoughts: Decisions need to be made for this contest as we decide whether to go for the win – or look for a spot of value. If you ant the value then Zambella may be your first port of call – trading as I write at odds of 9/1, which seems strange when you look back and see she was 15 lengths ahead of joint-favourite Elimay at Aintree at level weights, the same as today. Of course this is a very different track and a bigger ask, but form is form, and there is no reason why she cannot get involved. Elimay tried different tactics when making all to win last time out in cheekpieces but those tactics are hard to carry out round here in a small field, and Mount Ida may be the one to be on. Unbeaten this season and narrowly ahead of Elimay at Fairyhouse, she may have the stamina edge, and could give Gordon Elliott another winner.

Stats: No winners shorter than 9/2 and none at bigger odds than 50/1, and they have all been aged five six or seven. Every winner has been rated 133 to 145 and has raced within the last 90 days.  Another weighing in at 6-4 to the Irish, with Willie Mullins winning three of the last eight renewals, and Gordon Elliot two.

Thoughts: I really have no sensible opinion on this race and may not even have a bet, but if  I do, then it will be small one on Langer Dan, though I suspect he will be a bigger price come racetime. Dan Skelton has been saving the six-year-old for this, and he bypassed the Imperial Cup last Saturday which may be a clue as to how strongly they fancy his chances. Second to Galopin Des Champs in this race last season, that form doesn’t look too bad right now, and with one run since, a pipe-opener when sixth at Taunton, and top conditional jockey Lorcan Williams in the saddle, I am expecting a big effort though heavy ground is the unknown quantity here.