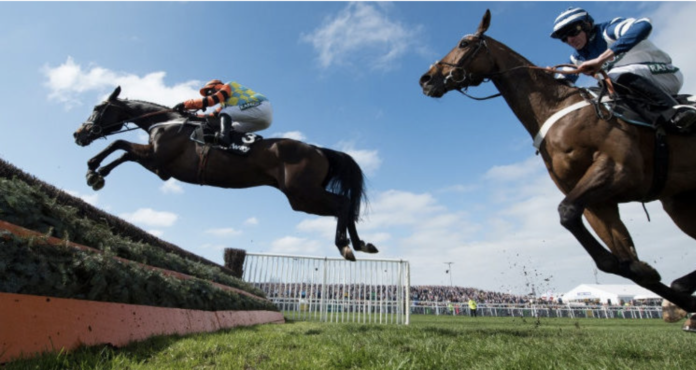 We spoke to injured jockey Lorcan Murtagh who although obviously gutted to be missing too many rides this year, will be back in the saddle sooner rather than later to ride plenty more winners.

Here are his thoughts on the first day of the 2022 Aintree meeting….where he very kindly gave his views on each and every race – and was give free reign to say as much or as little as he wanted – enjoy!

Pic D’Orhy is my number one pick for this race having already won a couple of Grade Two races over fences this season at Ascot and Kempton. Paul Nicholls has made no secret of the fact that he has targeted this meeting and the seven-year-old appears to be one of those kept back for Aintree. If he is ready to go as expected he should take all the beating here. Gin On Lime is another I looked at and she might get her own way out in front in this field, though I still think she is only playing for second place this afternoon.

I was quite taken with the way my old pal Brazil toughed it out at Cheltenham and I think he may well improve again for his success in the Fred Winter. If that is correct then he can prove too good for the rest of them here and make it three wins in a row under Mark Walsh.

I’m going to go for  go for Eldorado Allen here after the way he stayed on when third in the Ryanair and I think the step back up in trip will suit him perfectly at this track. I have been impressed with him this season and he has been improving all the time and he should give us a good run for our money. Protektorat has a two from two record here at Aintree and ran really well when third in the Gold Cup at Cheltenham but that was a very competitive race this year and it is hard to tell at this stage just how much that race might have taken out of him.

Brewin’upastorm has been in good form all year yet Paul Nicholls adds first-time cheekpieces here to see if they can sharpen him up just a fraction more, and if they do, he is going to be there or thereabouts once again today. Glory And Fortune is going up in trip and ran a super race when fifth in the Champion Hurdle and as I don’t think the trip will bother him he also had a pretty lively chance.

It’s all about Stand Up And Fight for me, trainer Enda Bolger targets these sorts of races and he looks to have been laid out for this race to me. He can go well at a big price with Aine O’Connor in the saddle. Cousin Pascal didn’t run as well as hoped at Cheltenham before being pulled up but he won this last year, and these fences may well see him back to something near to his best.

I quite like Before Midnight here though all his best form is on good ground so we don’t want any more rain. He can go well here if conditions stay on his side, but if not, then Dolos could take advantage.  As I keep saying, Nicholls is clearly targeting Aintree this year more than he did Cheltenham and he was pretty impressive when winning at Sandown last time out.

I quite liked the way Naughtinesse  won round Fairyhouse on just her second start and she improved a lot for her debut that day and I feel she has a pretty lively chance. Lady Excalibur is only very small but she did won over course and distance last time out and I just get the feeling she has been held back since that day specifically for this race, and she could get involved in the finish as well.

And if you could ride one horse?

Brewin’upastorm – as I mentioned he has been in great form all year, and I just think the cheekpieces might bring about that little bit more if needed.

Three off the tee at the Colonial, Fort Worth, Texas

Tee time and back to some bread and butter golf!