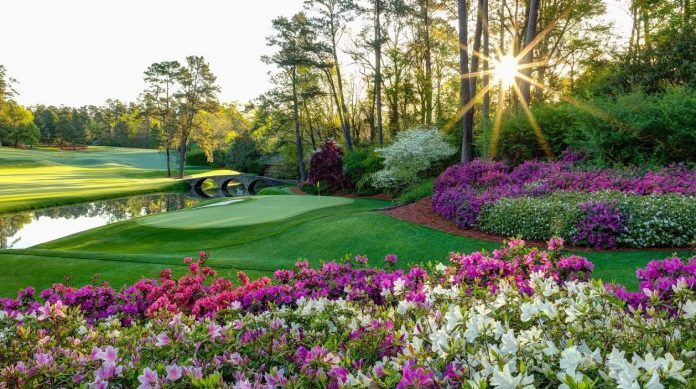 I don’t think anyone on planet Earth found last week’s winner who apparently traded at over 200/1 on the exchanges pre-tournament, but we brush ourselves down and move on regardless – that’s the frustration and the fun of this sport all in one, and this week we have the not so small matter of the Masters to deal with.

For those new to golf, this is one of, if not THE most important event on the golf calendar. The fact that is it played at the same venue gives it a kudos above all others, and let’s face it – who wouldn’t fancy having a round or two of golf here just to see how far over par they would end up (trust me, it’s a big number), and in my case, how many golf balls I could lose.

The Augusta National in Georgia is one of the World’s great courses, and will look as manicured and immaculate as every this year, surrounded by blooming flowers, but don’t let that fool you – when the weather changes, as it regularly does, the dream can turn in to a nightmare. Amen Corner has been responsible for a few upsets in the past with a difficult 505 yard par 4 at the 11th , a par 3 at the 12th with a 20 foot deep green and swirling wind on a regular basis, and the 13th, a dog-leg par five with a green where the notorious Raes Creek appears to suck in any ball not played to within an inch of perfection. This is where the Masters may be won or lost, but if one of my suggestions gets it right, it could be them walking off with the green jacket for 2022.

Course: Par 72 7475 yards with $11.5 million on offer in prize money, plus many times that in sponsorship deals for the winner. Open fairways but long drives and the ability to move the ball (particularly right to left) is a big advantage. The greens are expected to be lightning fast which makes life even more interesting.

It may sound as if I am implying a touch of cockiness but Brooks Koepka’s form in the lesser events cannot really be taken at face value – he only really comes alive when it comes to the headline grabbing events, and I am expecting him to be on fire this weekend. Anyone who thinks the fire doesn’t burn as brightly any more only needs to search the internet for recent interviews and quotes – he has not been happy with his ranking in recent months, nor his game, though in his defence he has been coming back from injury, and you need to be at your best to win any tournament these days. His recent efforts have seen plenty of signs he is on the way back with a loss to Dustin Johnson at the quarter final stage of the WGC Matchplay, having won all of his group matches and seeing off Jon Rahm in their last 16 encounter.  Since 2016 he is an incredible 92 under par in all the majors (over 60 shots clear of nearest rival Dustin Johnson), and if you want proof positive that he comes alive when the big bucks are on offer – there it is.

Ok well now and again I am allowed to pick a player just because I want to – and not because of stats and past performances alone. His rise to the number one spot has been truly remarkable, even if it has gone almost unnoticed in the majority of the sport media. I will admit it – I can get stressed playing pool for my pub team, which is why I look up to people like Scottie who just turn up and play the game they love – he really doesn’t seem to realise there is any pressure on him at all, or that they eyes of the World are watching. If there is a more pressure in golf than this then I guess the Ryder Cup would be it – and he went though that unbeaten – and I can only guess it is an American thing – he has always known he would be a top golfer and has never doubted if he would win a major – only when.  His recent form in lesser events has been ridiculous with the WM phoenix Open, the Arnold Palmer Invitational, and the WGC Matchplay all going his way in recent months, and in a period when we all wondered if we would ever see a dominant player again.

Three April starts here and three top-ten finishes make the 40/1 just that little bit too big to ignore with 11 places on offer (less if you take the bigger prices – your call). His inconsistency is a concern, with a brilliant single round of 66 last year still only seeing him scramble home in 10th,  while his odds also reflect that fact that he hasn’t been anywhere near to his best so far this season. What is noticeable is that his putting has been improving considerably in recent months, and on Bentgrass here, which suits him so much better, he can use his length off the tee to his advantage once again, and put in a challenge for the places at a big price. I would even suggest you could get a touch bigger if you wait to place your bets until just before the start as the bookmakers adjust to the money expected for the better fancied players.

My own betting will be very light today with many notes taken at Ascot!