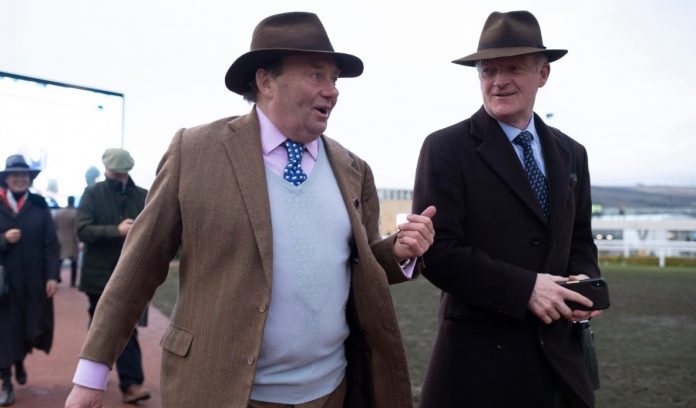 Stats: Nothing younger than five or older than nine has won this despite 24 giving it a go. A top 10 finish last time is on the CV of 20 of the last 24 winners with three of the others failing to complete, so we can stick a line through anything who came home 11th or worse (in theory). Only two winners carried more than 11 stone seven, with only one rated higher than 145, and one lower than 124. Recent stats tell us that favourites are having a torrid time (none in the last 9, with winners at 33/1, 20/1, 22/1 etc). Nicky Henderson has trained two of the last eight which is a stat worth noting, while Jack Kennedy has ridden the last two winners – both on Irish raiders.

Thoughts: Well the stats trimmed the field down to “just” the 16 remaining horses so they weren’t a great deal of use, and with Jack Kennedy riding one that has been “struck through”, I am left with Nicky Henderson as my only hope of success. Balco Coastal looks the obvious one with Nico De Boinville in the saddle, but he will not want any further rain with soft ground the reason given for him pulling up last time out at Sandown, though as I write we have good ground which will suit him ideally. He looks each way value on his January Cheltenham form when second despite being hampered not once but twice, and is a good enough price at 11/1 (at the time of writing), though I may also have a few pennies on stable companion Fred. He has clearly had his issues but is very well handicapped if Nicky can get him back to anything near to his best, and at 33/1 I cannot let him run unbacked – just in case the master works his magic with the now seven-year-old gelding.

Stats: Six of the last nine winners (67%) have been six-year-olds, two have been five – and just the one aged seven. Three jollys in a row obliged from 2012 to 2014 – but none since. Nicky Henderson has won four of the last nine but none since 2016 with the Irish picking up the last two.  No jockey still riding has won this more than once in the same period.

Thoughts: When a race looks all over bar the shouting I always have a second look in case I have missed something – but hopefully I haven’t. We all have to accept before the race even starts that Willie Mullins is a master of his trade, and that El Fabiolo, once raced over hurdles and a very easy maiden winner at Tramore could be absolutely anything, but once we have acknowledged that, we can then look at favourite Jonbon. A point-to-point win was followed by a Newbury bumper and three impressive successes over hurdles before he ran in to stablemate Constitution Hill at Cheltenham in the opening race. Yes he was put in his place by no less than 22 lengths (he did lose a shoe as well), but I am pretty certain time will tell that was no disgrace, and he can get back to winning ways here.

Stats: Only one winner from the last 24 has been aged over eight, and none have been priced any bigger than 12/1. Seven-year-olds have won 11, six-year-olds six, and all bar one who completed last time out came home in the first seven. Every winner last raced within 60 days which could be interesting. On more recent stats, Nicky Henderson has won three of the last four renewals, favourites or joint favourites have taken six of the last nine, and the Irish have not won it at all in that timespan.

Thoughts: The only horse the stats rule out is Fury Road (Irish, last race 61 days ago), and with no Henderson runners, it’s off to the formbook.  L’Homme Presse won the Brown Advisory well enough and has form on good ground as well so I cannot see why he is second favourite, with the Paul Nicholls trained Bravemansgame heading the early markets, if only just. Although Ahoy Senor was only second at Cheltenham, I didn’t feel they rode him as they wanted that day, and if they allow him to take a cut at his fences from the off here, he will do one of two things  – crash through a few and out himself out of contention, or have them all in trouble form a long way out – and I am pinning my hopes on the latter option. He simply does not have the gears if it turns in to a sprint and needs to grind them in to the dirt from the off, and if he can use those tactics in this small field, I think he may be able to reverse Prestbury Park form on this better ground.

Stats: No winner bigger than 20/1 in 24 runnings, and only one who completed last time out and failed to finish in the first six home has been successful. Seven to 10 year-olds have won 22 of the 24 on my database so that looks the age group to focus our attentions on.   The first four in the betting have won 22 of the 24 as well, and all bar two had also run within the last 30 days. Looking at the more recent trends and Willie Mullins and Nicky Henderson have won two each, five of the last nine have been favourite or joint favourite, and the Irish have taken the last two.

Thoughts: Those who assume all Venetia Williams trained horses need heavy ground could be in for a rude awakening here if I am correct and Funambule Sivola comes home at the head of this field. He is the only one who fits most of the stats (especially the running within 30 days aspect), and wasn’t disgraced when runner-up to Energumene in the Champion Chase at the Cheltenham Festival. The step up in trip here looks sure to bring about further improvement, and although he does have Fakir D’oudairies to beat, I am hoping there is a lot more to come from the son of Noroit who could yet be a champion in the making.

Stats: The odds appear to be no guide at all here with winners at all prices including a couple of 50/1 chances, but a top nine finish last time out is a bonus with 22 of the last 23 (one winner pulled up last time out to mess up the math). No winners over the age of 11, none who fell last time out and none who unseated either. No winners carrying over 11 stone eight, and none rated higher than 152. No winning favourites in the last nine, though three trainers have dominated – Colin Tizzard (two), Nicky Henderson (three), and Willie Mullins (two, but perhaps more importantly, the last two).  Harry Cobden has ridden the winner twice, though both were on board Ultragold for Colin Tizzard.

Thoughts: When I write all those stats I really hope they will serve a purpose – but not much of one in this case. Losing horses by the stats left me with a ridiculous 22 horses to work with, and with no entries for the Tizzards this season, and the Mullins ones ruled out by the stats I am duty bound to point in the direction of a certain Nicky Henderson. He as four entered here but it seems sensible (not necessarily accurate) to suggest Nico De Boinville had the choice with the exception of Janika, and he has come down on the side of Mister Coffey. Second to Chambard in the Fulke Walwyn Kim Muir at Cheltenham, he has been pout up 4lb for that but deserves a win this season after four top three finishes, though someone he is yet to get off the mark over the larger obstacles.

Stats:  A 66/1 winner last year (Ahoy Senor) and other winners at all prices suggesting the market is not an infallible guide. 22 of the 24 winners finished in the first five last time out (one fell) which is a good starting point. Five to seven-year-olds have won 23 of the last 24, while 20 have surprisingly come from the first six in the market come the off. All bar one had last raced within 60 days of today. The Irish have not won this in the last nine renewals, but Nicky Henderson has won three of those, and despite last seasons big priced winner, four of the last five to be successful have gone in at a single figure price.

Thoughts: No Henderson horse for me to instantly tag on to in this race,  but I am willing to give Stag Horn one more chance in the hope the better ground and flatter track will help him. Rated as highly as 108 on the flat, he won his first two starts over hurdles for Archie Watson at Hereford and Warwick but ran no race at all in the Albert Bartlett at Cheltenham before being pulled up. He needs to bounce back from that but is a sensible price to do so, and I am hoping he will find conditions this afternoon far more to his liking.

Stats: Only the 12 runnings to work with here but youngers horses seem to come out on top with 10 of the winners aged four to seven. 10 of the 12 have been from the first eight in the betting, all bar two have been rated between 124 and 141. None raced within the last 15 days, none had last raced more than 120 days ago, with 11 of the 12 winners last being seen in action between 16 and 60 days ago. No trainer has doubled up in the last nine, and only one joint favourite has been successful in that time with six of the nine at double figure prices – punters beware!

Thoughts: Amazingly (if it is accurate, of course), using the stats above has seen a field of 16 rapidly reduced to just the six- namely Hacker Des Places, Richmond Lake, Washington, Homme Public, Severance, and Whizz Kid. Looking at the yards responsible for the remaining six and it will be Hacker Des Places for me. A mere baby at the age of five I am assuming that a) Paul Nicholls will have him spot on as he looks to tie up the trainers’ title and b) that there may well be plenty of improvement to come with experience. Hacker Des Places each way

Musselburgh, my Newbury of the North