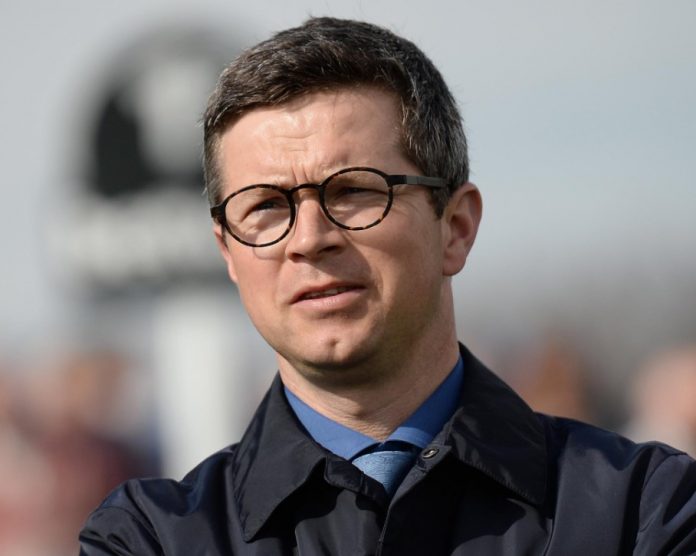 Roger Varian believes an outing in the Pertemps Network Conditions Stakes at Haydock Park on Saturday (7th May) could be the best option to start new recruit Dragon Symbol off in this season. However, the trainer insists a late call will be made over the four year old’s participation.

The Newmarket-based handler is weighing up whether to start the son of Cable Bay, who has joined his team from the yard of Archie Watson, in the six-furlong prize or in the Group Two 1895 Duke Of York Clipper Logistics Stakes over the same trip at York next week.

After winning his first four starts, the Yoshiro Kubota-owned colt developed into one of the leading sprinters of his generation in 2021 with a number of respectable efforts in defeat starting in the Group Two Sandy Lane Stakes at Haydock Park in May, when he was the nose second to Rohaan.

Although placed second after finishing first past the post on his Group One debut in the Commonwealth Cup at Royal Ascot last June, Dragon Symbol backed that effort up by filling the runner-up spot in the Group One Darley July Cup at Newmarket the following month.

Dragon Symbol added to those efforts dropped back to five furlongs when finishing second in the Group Two King George Stakes at Goodwood before finishing third back at the top table in the Nunthorpe Stakes at York.

Newmarket-based Varian said: “Dragon Symbol has got some very smart form to his name and since arriving in the yard he has been very good to work with.

“He is very straightforward and has got a good attitude. We are looking forward to running him.

“His last win was in the conditions race that was run at Hamilton at the weekend, but he ran some great races in defeat last season.

“He was first past the post in the Commonwealth Cup before the placings were reversed along with being second in a Sandy Lane, July Cup and third in a Nunthorpe. That is all top sprinting form.

“He is in the 1895 Duke Of York Clipper Logistics Stakes next week but we have put him in Saturday’s race and it maybe just kinder to start the season there. “However, you only have to look at the entries and you are still racing against graded level horses.

“Nothing is set in stone and we will make a late call which race we go for and do what is right for the horse.”

Having mixed and match between five and six furlongs while under the care of Lambourn-based Watson last season, Varian admits he could follow a similar path this campaign.

He added: “He looks to me like he could go five or six and like Archie did last season I expect we will run him over both trips as well at some point this season.

”You need a lot of speed to finish third in a Nunthorpe but his stamina didn’t show any signs of waning over a stiff six furlongs in the July Cup. He also showed he gets six well on soft ground in the Commonwealth Cup.

“It could be that a stiff five furlongs in the King’s Stand Stakes at Royal Ascot might just be his ticket.”

While a final decision is to be made regarding where Dragon Symbol will start his season, an outing in the Listed Pertemps Network Spring Trophy (7f) is on the cards for stablemate Laneqash.

Campaigned exclusively at Group Two level last season, Laneqash finished second in the Hungerford Stakes at Newbury, third in the Park Stakes at Doncaster and fourth in the Joel Stakes at Newmarket.

Although Varian is confident Laneqash, who has been gelded over the winter, still has a bright future ahead of him he admits he might just need the run at the weekend after reporting him to have been slow to come to hand this spring.

He said: “He was gelded over the winter as he was not going to make a stallion but he has some nice bits and pieces of form to his name. The race on Saturday is a nice starting point for the season ahead.

“He was second in the Hungerford and fourth in the Joel Stakes and they are two solid bits of form and as a two year old he was second in a Listed race at Doncaster behind the horse of Ralph Beckett’s (New Mandate), which won at Ascot the other day.

“He is not a Stakes winner yet but his form suggests he is good enough to be. It is most likely to be a competitive race but seven furlongs on what looks likely to be on top of the ground should be ideal.

“Since his debut win he has been running in good races at Stakes level every time. He has put up good performances and it is not through a lack of trying why he hasn’t won another race.  “He has been slow to come to hand this year and he is just about there now. He might need this first run back to get him there.”

By Graham Clark, courtesy of The Jockey Club

Today’s Ratings and Scribblings for Goodwood, Newmarket, Doncaster and Hamilton – 31/07/21