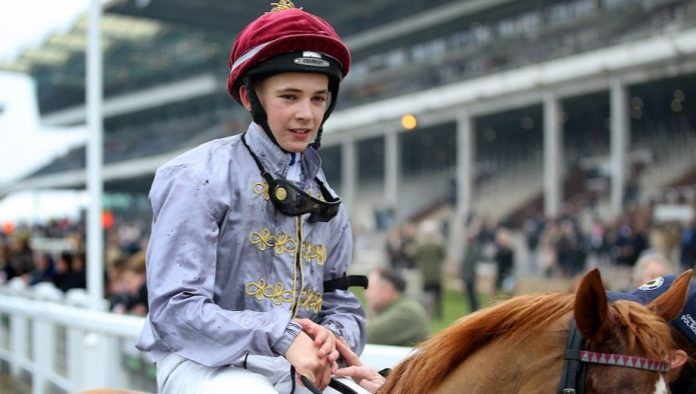 Rising star of the weighing room Harry Davies admits it would be a “fantastic story to tell” if he could follow in the footprints of some of racing’s biggest names and repay the faith trainer Andrew Balding has placed in him by claiming the Apprentice Jockeys Championship in 2022.

In recent seasons the Kingsclere handler has been instrumental in helping the likes of Jason Watson (2018), Oisin Murphy (2014), William Buick and David Probert, who shared the 2008 title, claim the coveted crown at the beginning of their respective careers.

Not only would winning the Apprentice Jockeys Championship this season see Davies join an impressive alumni list to have graduated from under the tutelage of Balding but it would also see him emulate his father Stephen, who landed the same prize back in 1994.

Though now settled into life at Park House Stables the 17 year old, who graduated through the pony racing ranks, feared at one stage that his dream move to work with Balding on a permanent basis would not come to fruition.

Davies said: “Before coming here permanently I had spent several holidays here riding out, learning the ropes and getting to know everyone here so then when I came here full time I knew everyone.

“It was good as I got to get a relationship with the boss before my career even started. I actually first met Andrew in the weighing room at Newmarket when I was seven or eight years old.

“Hopefully I can repeat what the likes of Oisin Murphy, William Buick and David Probert, as it would be a fantastic story to tell in a few years’ time.

“I always had my eye set on coming here as if there was one man who could make you champion apprentice jockey, it was Mr Balding.

“When he said he wasn’t going to take on any more apprentices it broke my heart a bit but a couple of weeks later he wrote me an email saying he would be happy to still take me on.

“Receiving that meant so much and it showed what sort of character he is and how he was willing to support me.”

Given his connections it was clear from a young age what direction Davies was going to head in, much of which he owes a large thanks to his mum, and Hugo Palmer’s assistant trainer Angela Shea, who he has described as his “rock” while growing up.

Davies said: “I’ve pretty much ridden all my life. My mum has been fantastic and put everything into me and tried to make me be a jockey. I love riding horses and it feels like it was always going to happen.

“I won the Charles Owen Racecourse Series twice and rode plenty of winners which is good publicity as a kid as it is almost the start of your CV.

“My mum would drive me all around the country on her weekends off. She put pretty much everything into me and she has been my rock really.

“She really wanted me to come here as she knew it would be a good place to learn and I’m here now and it seems to be going pretty swimmingly.”

While not knowing his father well Davies admits he remains a role model of sorts, but he believes much of his early success is down to the assistance he has received from his stepfather, and agent, Phil Shea.

He continued: “I’m not in touch with my father but from what people say he was a pretty talented rider which speaks for itself.

“It was a shame that he didn’t keep riding due to problems but I think my father in a sense is a massive role model as well.  I’m trying to learn from the mistakes he made to better myself.

“My agent Phil Shea has done an amazing job booking me all these rides I’ve had so far. He helped get Cieren Fallon and Josephine Gordon the apprentice title, so he is proven to be good with apprentices.

“We have that personal connection with him being my stepfather, but when the chances are there he takes them. He has done a fantastic job for me and I can’t complain.”

Although one of the front runners to lift the champion apprentice title this year Davies believes he faces strong opposition from several riders in particular, but he admits he can’t wait to get involved with the battle.

He added: “You’ve got another great talent there in Benoit de la Sayette at the Gosden’s yard who will up there fighting for the title.

“You have some other very talented young riders there like Ryan Sexton. He is based up north and he will be another big competitor, as will Saffie Osborne.

“It will be a very competitive year but it is great to see so much young talent come through.

“It will be entertaining for the public and racing fans. It is exciting and I can’t wait to be part of it.”

For those that wish to pursue a career in sport academic studies can often get in the way, however Davies is thankful for the support he received from staff at Newmarket Academy in helping him realise his ambition.

He said: “Newmarket Academy were fantastic and I can’t thank them all enough. They were all very supportive of the vision I had.

“It was great to see people supporting that and some people aren’t as lucky and they don’t get that support but for me it was great.

“My teachers were incredibly supportive and I can say from the bottom of my heart that my school were very believing in me.

“Another good thing the school made me do was get my grades to fall back on. I was never the A class student but I always knew as much as I wanted to be a jockey, school was important.”

Despite only having his first ride under rules this year Davies is fast closing in on riding 20 winners, and having his claim reduced from seven pounds to five following a whirlwind start to life in the saddle.

Among those victories have included successes at Epsom Downs and Ascot along with a first winner from his opening ride on Newmarket’s Rowley Mile aboard Shine So Bright for his boss, a victory he insists is an early career highlight.

He said: “The Friday of the Guineas Meeting I rode a winner for my boss and King Power aboard Shine So Bright and that was probably the best feeling I’ve had crossing the line as it meant so much.

“The horse is not very easy and he can be a bit quirky, but to pick up the ride in a decent handicap for my boss at the Guineas Festival – it truly meant so much.

“Hopefully it can stem connections with King Power and I can continue to get some support from them throughout the year.

“It has definitely been the highlight of my career so far. It was good for everyone involved.”

While having aspirations of ending this year as champion apprentice jockey Davies also hopes to achieve one other goal before 2022 comes to a conclusion.

He said: “I’ve already had some fantastic opportunities including on the opening day of the turf season when I rode Modern News in the Lincoln for Mr (Charlie) Appleby, who has been another big supporter of mine.

“While we didn’t quite get the right result to get a ride in a big handicap like that was a big deal.

“I’d love to, as an apprentice, try to ride in a Group race as I think that would be a massive achievement.

“All I need to do is keep impressing the right people and hopefully those opportunities will come.”

Musselburgh, my Newbury of the North