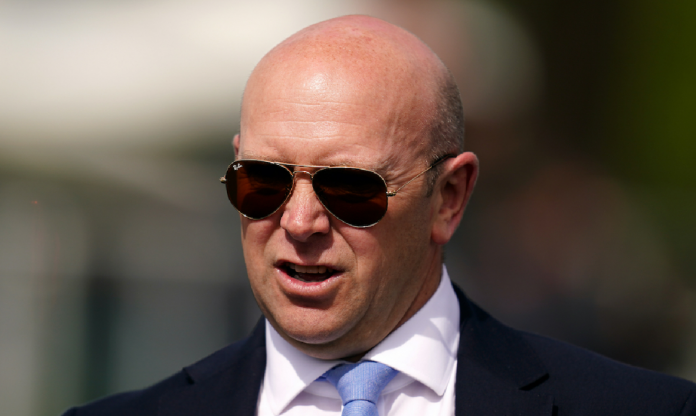 Trainer Owen Burrows insists stable star Hukum is in “great nick” ahead of next month’s Coronation Cup, but admits the five year old’s participation in the Group One prize at Epsom Downs on Ladies Day at the Cazoo Derby (Friday 3rd June) will be determined by ground conditions.

The Sea The Stars horse is one of 15 entries remaining in the mile and a half contest following today’s scratchings deadline, alongside the likes of last year’s Cazoo Derby winner Adayar who could bid to become the first Derby scorer to go on to land the Coronation Cup since Roberto in 1973.

Although Hukum has fallen short in both of his previous Group One outings in the 2019 St Leger at Doncaster and on his most recent start in the Sheema Classic at Meydan in March, the Lambourn handler believes he is more than worthy of a place in the line-up.

Burrows said: “Hukum is not 100 per cent definitely going there but we’ve left him in. Like every trainer in the country is probably saying, we would like to see a little drop of rain.

“I know Andrew Cooper (Clerk of the Course) does a great job at Epsom and the ground will be very safe but a little bit more juice in the ground would be beneficial to Hukum going around there.

“We will have a look at the race closer to the time as Royal Ascot is just around the corner and then there are few races in Europe and the Canadian International coming up, so there are plenty of options.

“He is in great nick and I’ve been very happy with him since he came back from Dubai. I thought he did well out there.

“The two times he has run in Group Ones he has just fell a bit short but he has had reasonable excuses both times. He probably didn’t stay in the St Leger and the Sheema was very tactical and he had a bad draw.

“He would probably have a better chance abroad as they are notoriously not quite so strong races but I think he deserves his chance in a race like this.”

Reflecting on Hukum’s last start Burrows, who has recently moved yards in Lambourn from Kingwood House to Farncombe Down Stables, is confident that had things worked out differently in the Sheema Classic he would have finished much closer than seventh.

He added: “He was the best horse in the Group Two race (Dubai City of Gold) on Super Saturday. He had a bad draw and he wasn’t fully wound up for that as we left a bit to work on for the Sheema so he did well to get the job done.

“It was probably the best run of his life in the Sheema and that seventh next to his name probably does him a bit of injustice.

“He was drawn a bit wide there again and it became a bit tactical as they didn’t go as quick as I would have liked.

“I thought it was a very good performance and if things had gone differently with the draw and how the race was run he might have finished a length or so closer.

“It was still a massive run and I’m very proud.”

Although Hukum has not had a spin around Epsom Downs, Burrows feels he would have no problems handling its unique undulations.

He added: “I can’t see the track at Epsom being a problem as he is a very well balanced horse. I’m not too concerned about that.

“I just wouldn’t want to run him on fast ground around Epsom as one thing Jim (Crowley, jockey) said from the fall out in Dubai was that the ground was pretty quick for him in the Sheema Classic but as I said Andrew Cooper does a great job with the track.”

Also among those also left in the Coronation Cup are last year’s winner Pyledriver from the William Muir and Chris Grassick yard and the Sir Mark Prescott-trained Alpinista, who rattled up a Group One hat-trick in Germany last season.

Godolphin handler Charlie Appleby could be triple-handed in the race after deciding to leave in last year’s Breeders’ Cup Turf winner Yibir and Group Two scorer Manobo alongside Adayar.

The six-day confirmation and £25,000 supplementary entry stage for the Coronation Cup is on Saturday 28th May.

The Coronation Cup is part of the QIPCO British Champions Series.

THE FOLLOWING ENTRIES HAVE BEEN SCRATCHED: Away He Goes (IRE), Gear Up (IRE), Hurricane Lane (IRE), Mojo Star (IRE), Albaflora

Low sun, frozen tracks, 12 races this weekend discussed and all the winners free to access!