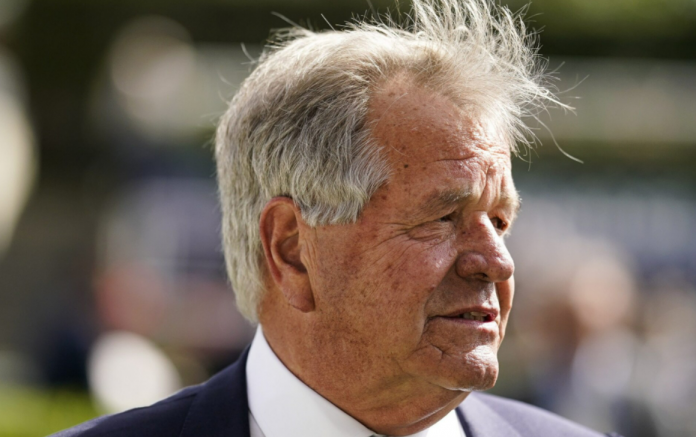 On the very day we posted up our 20 To Follow for the flat season 2022, Sir Michael Stoute’s Desert Crown ended weeks of domination in the Cazoo Derby trials by the powerhouses of Ballydoyle and Godolphin to win the Group Two Al Basti Equiworld Dante Stakes at York, with bookmakers immediately installing him as favourite for the world’s greatest Flat race at Epsom Downs on Saturday 4th June.

A lovely 7/2 winner for those that were on.

The son of Nathaniel arrived at York having appeared just once on a racecourse in his life – winning a Nottingham maiden in November – but there had been plenty of anticipation about Stoute’s charge, who had already shortened considerably in the ante-post market for the Derby in the days leading up to York’s Dante Festival. He was the 7-2 joint-favourite today, alongside eventual runner-up Royal Patronage.

First staged in 1958, the Dante Stakes has produced 10 subsequent Derby winners in its history and if the market is to be believed we may be on the brink of another, with bookmakers shortening Desert Crown into favouritism at around 2-1 for Epsom Downs following his three and a quarter length success this afternoon.

Stoute has five Derby winners to his name, with two of those in North Light (2004) and Shahrastani (1986) striking at York beforehand, and while typically reserved, the master handler was pleased with what he saw as he goes in pursuit of a 16th career Classic winner.

He said: “It was a very pleasing performance because this was only race two for him and we’d only just got him ready for this race. He’s had that hold up so I was very pleased, he was smooth.

“He was impressive in his maiden and we got behind schedule so we had to do what we did and he didn’t let me down – he surprised me actually.

“His temperament isn’t a problem and he’s a very relaxed horse. The Dante is a good trial, it’s the best. I’d be very hopeful that the extra two furlongs at Epsom wouldn’t be a problem.

“I would think others in the race would improve too, but we’ll expect some improvement from him because this is only his second start on a racecourse.

“I would think other than Workforce all of my other Dante winners would have had a previous race coming into it, so that’s really encouraging.”

And when quizzed about his feelings on having the new favourite for the Derby, he quipped: “I was excited watching the race but now I’ve calmed! It’s a big thrill and it’s good for all the staff, we’re a team.”

Winning jockey Richard Kingscote has had just one ride in the Derby previously, when 11th of 12 on the Harry Dunlop-trained Knight To Behold in 2018, and he expressed his delight in the aftermath at what he had seen from Desert Crown.

He said:  “He was very relaxed and going a nice rhythm and he moved well in the straight, so he did everything that I asked of him and I’m very pleased.

“It’s still early days for him but after a performance like that you’d hope it could be exciting for him.

“Stone Age was very impressive and quickened away and if he were to go to a Derby it’s always going to be very difficult, but I’ll leave that to Sir Michael.

“They’re all individuals and sometimes you think one will improve a lot and if they’re honest they often don’t improve quite as much as you’d think, but he’s done well from two to three. I sat on him last week and I was taken with how much he’d filled out so they’ve done a good job with him.

“I’m in a very privileged position to be able to work under Sir Michael and Ryan (Moore) and I’ve been very lucky that Ryan had one in the race and people are trustworthy to let me on. I’m very pleased.

“He’s very relaxed and he’s doing everything we could have hoped. He’s answered quite a few questions today and he’s done it in a likeable manner.”

Desert Crown races in the colours of Saeed Suhail, who owned the 2003 Derby winner Kris Kin – who was also trained by Stoute. The colt was bred by Strawberry Fields Stud, based just at Teversham just outside Newmarket. He was sold for 280,000 Guineas as a yearling at Tattersalls in October 2020.