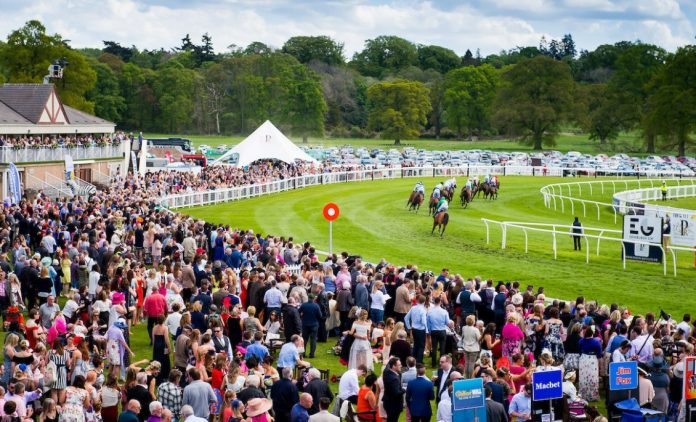 Successful trainer Roger Varian, speaking away from the track, said: “I’m absolutely delighted as we have always rated this horse very highly. I can’t tell you why he ran so poorly in his two starts last year and on his only start this year.

“I have to say the gelding operation might have something to do with it. I want to thank Sheikh Mohammed Obaid (owner-breeder) as he has been very patient with this horse and he is now building his career a little later than when we planned.

“When he had run so poorly you could tell half way round that this horse was not going. He is such an impressive horse at home he had me scratching my head. I think the gelding operation has turned him inside out. The whole way round while he was travelling sweetly you always felt he was going to do it and he did.

“I think everything is still on the table for this horse. I know he has only won a handicap but it was a competitive handicap and he looked like the horse he had promised to be.

“We had lofty plans with him last year and I’m sure we will have lofty plans at some point this year.

“We always thought this was his trip. We came back in trip at Doncaster but he ran so poorly there and in his two starts last year as he was beaten before the trip came into contention.

“I have always liked this horse and I’m not saying he has let us down but it has been a job figuring him out.

“After he ran in the Dante last year he had an injury then in the Spring Mile at Doncaster he was beaten 35 lengths and how do you explain that. He has always travelled sweetly at home but today he did it on the track and he looked like a horse with a future and it is all about finding horses like that.”

Andrea Atzeni, the winning rider, commented: “He won very nicely as a two-year-old, and then we tried him quite highly last year – we ran him in the Feilden to see whether he was a French Derby horse, or a Derby horse, and he ran OK. Then we tried him in the Dante and it didn’t really work out, so maybe the horse didn’t really have a chance, but we were scratching our heads a bit because his work at home has always been good, which is why we tried those races.

“He’s obviously beautifully bred, by Shamaradal, and the dam [Emirates Queen] was a good mare – I used to ride her – so it’s nice to see him doing that. He does need to get his toe in, and he’s obviously been gelded.

“I’ve no idea what future plans may be – we didn’t know what to do with this fella until today! Trip-wise, we didn’t know whether he was a mile or a mile and a quarter horse. It’s nice, and he’s obviously a homebred.”

David Menuisier, trainer of runner-up Soto Sizzler (9-2), said: “Off 105 it was a gamble really, because despite loving the track it was a challenge. We are absolutely delighted with him. We couldn’t be more proud, as he’s gone up 14lb or so in the last year, and after a tendon injury that’s quite exceptional. He’s probably run another personal best.

“We could have run in a Listed race as they are sometimes easier to win off that rating, or we could have run on a conventional track. But he loves Epsom and so we thought ‘let’s do it’. I think we’ll have to go up in grade now and it would be nice for the owners to get a bit of black type, and for the horse.”

Alastair Donald, representing King Power Racing, owner of third-placed Good Birthday, said: “He’s run a great race and travelled so strongly and looked the winner there.  “He loves that bit of dig in the ground and he’s probably just at his best over nine furlongs, he’s been third in a Cambridgeshire before so there ought to be a good race for him in the autumn. He probably won’t get in the Royal Hunt Cup, so there probably won’t be a race for him at the Royal meeting.”