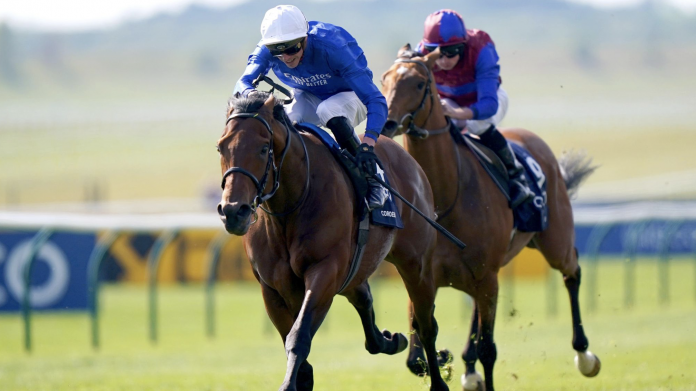 As I mentioned in the Podcast, I think?, Day 1 is my favourite day of the meeting but the second day is extremely competitive racing and with fingers crossed I have posted up the verdict from the jury currently residing in Spain.

A dirty job, but someone has to do it.

In all honestly this is not a race I had a particularly strong opinion on at first glance with so many improving sorts, 14 of them a winner last time out, and 12 of those currently unbeaten, and something has to give. Naturally, Wesley Ward’s American challenger Lover Reigns is on or near the head of the market and we can be pretty certain that the daughter of US Navy Flag will be sharply away after her 10 lengths debut success at Keeneland.  She could be a class apart from these but the form is hard to quantify and she has certainly been overbet, and there may be better value to be found elsewhere. If I am allowed two against the field at bigger prices, my first choice would be the Clive Cox trained Katey Kontent, the winner of both her starts, coming from off the pace at Salisbury before sitting nearer to the early pace before running away from her rivals at Goodwood for a comfortable victory. Her time was decent enough as well which is a bonus and at 10/1 I can see her hitting the frame under Adam Kirby, though I also like the chances of Queen Of Deauville for those looking for a huge price – she can go well for the Johnstons, with the booking of William Buick to ride catching my eye here.

Confusion for me in this race over the mile and three-quarters with the Godolphin pair of Nahanni and Hafit heading the market, The first named is presumably the choice of William Buick yet Hafit is rated 4lb his superior – and may have improvement to come in first time cheekpieces. There is only one thing to do when you can’t decide between two at the head of the market – and this is to look elsewhere, so my money will be on Eldar Eldarov each way instead! Trained in Newmarket by Roger Varian, the three-year-old is unbeaten after two starts with a win at Nottingham over a mile and then Newcastle over a mile and a quarter – yet connections add an extra half mile this afternoon, which as a son if Dubawi, seems a strange move. Perhaps I shouldn’t see conspiracy theories around every corner, but he has plenty of other races he could have been sent for, so I am assuming his trainer has seen things in his work that make him think he will improve for a test of stamina, and as I feel Roger is one of the more astute handlers, he ought to know better than the rest of us combined.

Although there are a disappointing five runners for this Group One event, the fact that Lord North currently trades as the outsider despite winning close to £4 million in prize money does at least suggest it is a high-class renewal. I am afraid to say I cannot side with the bookmakers (do I ever) and cannot see why bay bridge is as short as 11/8? Yes he has won his last five starts and is on the upgrade, but two of those were in handicaps, and the latest an admittedly impressive Sandown success – but in a Group Three. He has to do more here, and may well do so, but I am hoping Lord North can bounce back to his best and win this for the second timer after coming home in front in 2020. When you look at the rest of the field, Japanese raider Shahryar’s best form is over a mile and a half, State of rest was a length and a quarter ahead of Lord North at The Curragh but is half his price, and Grand Glory may prefer softer ground, all of which has talked me in to a small win bet on the Gosden gelding, who was rated superior to all of these off a mark of 124 in the past, and is not one to write off just yet, with Frankie in the saddle.

Mother Earth may find some improvement for the application of cheekpieces, but she seems to have gone off the boil a littler since her 1000 Guineas win last year despite numerous solid efforts. If anyone can get her back to her peak then Aiden O’Brien is the man, but I have always had a soft spot for Saffron Beach, and I cannot desert her now. She is certainly the apple of trainer Jane Chapple-Hyam’s stable, and rightly so with a win in the Sun Chariot Stakes at Newmarket last October just one of her four career victories. Last time out, on her first start of the season at Meydan, she was fourth to dead-haters Lord North and Panthalassa in the Group One Dubai Turf, and if she has recovered from her travels, then I think her overall profile may be good enough to see her home in front this afternoon in this valuable contest.

With winners at all odds up to 33/1 in the last 10 renewals it seems all things are possible here, though it is noted that four-year-olds have won six of the last seven runnings, making them the sensible age group to focus our attentions on. Legend Of Dubai was one of the first to catch my eye and as he has won over further he won’t mind the expected “hell for leather” pace likely here, but he has been put up a prohibitive 11lb for an easy Newmarket success and that ought to make his life that bit more difficult. At an even bigger price, I have come down on the side of Rebel Territory, who was ridden with supreme confidence by Jim Crowley to get up late at Sandown, and races here carrying a five-pound penalty under the same jockey, who has a long history of riding for Amanda Perrett, the daughter of retired trainer Guy Harwood. I get the feeling this might be part two of the plan for 2022, and if that is correct, he may well be able to hit a place today at a decent price.

Another one of those crazy juvenile races where the first four in the betting won last time out, along with 10 others in this competitive field. For once I will be hovering at or near the head of the market, when Aiden O’Brien lets Little Big Bear take his chance after winning on his second start at Naas after being beaten a short head on his debut. Jockey Ryan Moore makes it quite clear he sees the son of No Nay Never as one of his best chances of the week, and as he looks a bundle of speed at home, he may be able to see off the rest of this field, with Seismic Spirit my idea for the forecast off the braver ones among you.

With just the one renewal of this contest to look at we have no worthwhile facts and figures to work with so to be fair, this is more of a guessing game than a realistic race to part with real money in. it sems fair to suggest that the Godolphin teams don’t have a high percentage of handicappers in their ranks with Group races their primary targets, so you have to wonder why they have kept White Moonlight in training? The winner of her first two starts at Kempton and Newmarket in 2019, she missed all of 2020 and 2021 before returning at Chelmsford over a mile and a quarter where ran really well before fading late on to come home a perfectly respectable third. Dropped back to a mile and racing off 2lb lower here thanks to the generosity of the handicapper, she ought to strip considerably fitter after her first run in 31 months, I am hoping she is far better than a handicapper, and if that is the case, a clear run would give her every chance.

It’s all about the wind-ops!