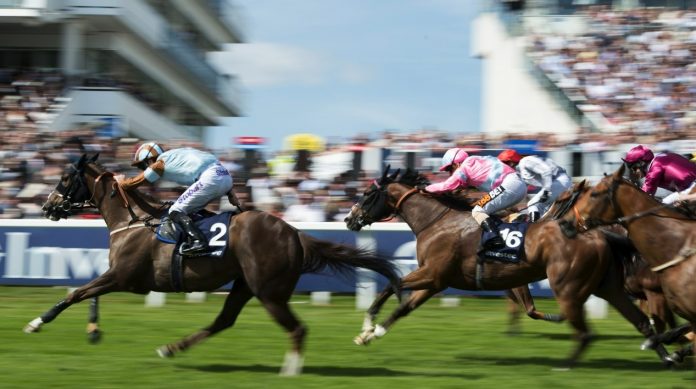 Saffron Beach stormed to a three-and-a-half length victory in the G2 Duke Of Cambridge Stakes to give trainer Jane Chapple-Hyam her first Royal Ascot success since 2016.

Despite being penalised for her G1 Sun Chariot Stakes win last season, the 5/2 joint-favourite was ideally placed to pounce off steady early fractions. William Buick took full advantage of that superior track position by kicking his mount for home entering the final three furlongs.

Saffron Beach responded brilliantly, stretching away and maintaining her lead throughout the final furlong. Thunder Beauty (40/1) came from off the pace to grab second, just in front of third-placed Primo Bacio (14/1). Bashkirova, sent off the other 5/2 joint-favourite, was in trouble a long way out and couldn’t get anywhere near to landing a blow.

Chapple-Hyam said: “I watched it with a real pro, [ex-trainer] David Loder, and he just kept saying, ‘so easy, so easy’, so he gave me real confidence, which was nice. You always worry about that 5lb penalty, but it’s been a rule for years and I suppose it’s there for a reason.

“I think Saffron Beach is good. It is hard going to Dubai off a winter break. She was up against hardened colts and geldings, as they showed in the finish. We didn’t have a prep race whereas here we went to Chelmsford and the July Course to get the work into her.

“I presume it will be the Prix Rothschild on August 2, the Sun Chariot at Newmarket, and then the Breeders’ Cup. We will leave it to the owners.”

Buick said: “Saffron Beach got a nice lead for the first half of the race. We were going slow, but she got into a nice rhythm. I wanted to get there in good time and not turn it into a two-furlong sprint, but she won very well and it was straightforward for her.

“I kicked pretty early, but she stays that mile well. She’s done that really well. She won the Sun Chariot last year and dare I say it, she might be a bit better this year.

“Well done to the team, she had a Group 1 penalty there and they are never easy to carry. I think she is getting better. She has started this season in good style.

“It’s great for Jane and all the owners involved. Jane has her horses in great form and she’s been unbelievable with this filly; she’s turned up everywhere and has always run with lots of credit, so fair play to her and to her team.”

Jason Kelly, assistant to David O’Meara, said of the runner-up: “Thunder Beauty has run a great race. She has obviously been consistent between Lingfield and the Curragh, and it was a good run in Ireland.

“We’ll probably drop back to seven furlongs. There is the Oak Tree Stakes at Goodwood and that will be high on the agenda. She is a high-class filly and is versatile ground-wise.

“She was big odds and we thought Saffron Beach would be handy so, instead of getting into a duel early, we thought we’d take our time and challenge late. She is probably slightly better over seven furlongs, so we wanted to make sure she got home. It was a super run.

“My uncle David Kelly owns her, it is his colours, and he will be happy now. I’d better give him a call! We are creeping up. She was Listed placed last year, then we were Group 3-placed and now we are Group 2-placed. We’ll try to get a Group win into her by the end of the year.”

Primo Bacio’s trainer Ed Walker said: “Finally she has got her ground! God knows what happened at Goodwood. She wasn’t right, but lots of my horses weren’t right. She came back and was not a well filly for a while. I was so miffed after Goodwood, and it did not come out immediately, but she was not herself and was brewing something. “It has taken a while to get her back. This race was a bit of an afterthought really, so we are hoping there will be improvement to come. I did not think we’d get here, but she worked really well and, due to a lack of alternative options, we thought let’s have a go. On that basis, you have to be super happy with that. I think she would have been a clear second if she was A1. I think we will go to the Falmouth, as she ran so well in it last year.”

Fakenham off! No, not an expletive, it’s off!