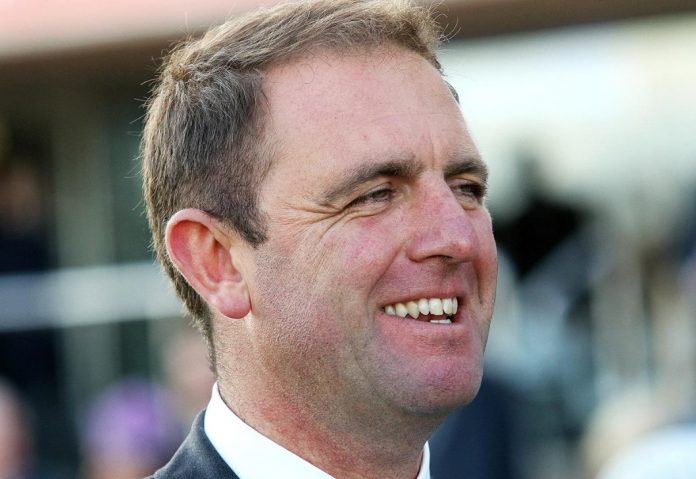 Naval Crown charged up the stands’ rail to give Charlie Appleby a second victory in the feature G1 Platinum Jubilee Stakes, leading home a one-two for the Newmarket trainer in the process.

Naval Crown, sent off a 33/1 chance under James Doyle, was too strong for stablemate Creative Force in a thrilling finish to the six-furlong contest, and in doing so exacted revenge for finishing second to the same rival in last year’s Jersey Stakes.

Creative Force (12/1) raced down the middle of the track with the main body of runners and fought his way to the front on the far side, only for his stablemate to be a neck ahead of him on the other side of the track.

US raider Campanelle (10/1) lost her unbeaten Royal Ascot record but went down on her sword in a dead-heat for third with Australian representative Artorius (17/2), less than a length behind the winner.

Appleby said: “Both horses were in great nick. One thing that Naval Crown had coming into the race was that he was still learning the sprinting game. He’d only sprinted once in his life, and that was in the Al Quoz. When I took him to Saudi and he hit the lid so quick… it was all a bit of a mess unfortunately, although we saw there his natural pace.

“This is a stiff six furlongs and we knew there would be plenty of pace. I said just hang on to the coat tails of them if you can. I’m not saying we’re not good enough to beat the Australians, but I said he will finish, because this horse has won over seven. He was fourth in a Guineas, so he’s a rock-solid horse.

“Creative Force ran a blinder. From that draw, it was always away from him, but Will gave him a fantastic ride, and it was just like the Jersey last year – they were ding-donging away with themselves in the end. They are two fantastic Dubawis.

“Had it been easier ground, I’d obviously have put Creative Force bang up there; he’s always been there and done it on the big stage. Naval Crown is cutting his teeth at the sprinting division now, and he’s learning fast. One thing about Naval Crown is that he’s a young sprinter – it’s only his second start over the six.

“I see no reason why we shouldn’t be going to the July Cup now on what we’ve seen today. We hadn’t really planned beyond this – we thought we’d just be following the Australians home to be fair. It was a great ride by James. He said that at halfway that he knew he had to get over to that rail, keep hanging away there, and he knew he’d be in the hunt.

“Full credit to all the team. I am lucky enough to stand here, but the team do all the work at home. The horses have been in rude health since the spring, and it’s hard to try to maintain it as the year goes on, but touch wood, they’re staying there. These are the prizes you need to be winning to put yourself up there [for the trainers’ title], but there’s a lot of the season to go, so I won’t be resting on my laurels yet.”

Doyle said: “At halfway I just got a lovely draft into the race behind Home Affairs, and he kind of dropped away around the two and a half. We had to be pretty brave and kick for home, but Naval Crown has campaigned over further. We knew the last furlong would be a fair way, but he’s got the stamina in his legs from going further.

“He’s very genuine. He owes me a big day, to be fair – he was red-hot favourite for the race in Saudi, and we had a bad draw. He jumped impeccably but just completely tore off. It was a bit of a disaster, but it taught us one thing, that he’s definitely a sprinter, so we dabbled with the idea and he ran a cracking race in the Al Quoz. That kind of taught him plenty that would have stood him in good stead today.

“This race is one of the highlights of the week, so to be able to win it again, and to do it for His Highness Sheikh Mohammed and Charlie – they’ve had an awesome week so far – it’s great to play a small part in that.

“Any season, to get two Classic winners right at the start of the season is incredible and sets the bar quite high – it’s a tough act to follow. This is what it’s all about. It’s really tough when you’re going into the last day here [without a winner]. Charlie said to me this morning, ‘why are you looking so grumpy?’ I said, ‘I’m running out of bullets!’ So for this fella to get us out of jail is brilliant. William said it was about time I pulled my finger out – he’s been winding me up all week – so when you get one on the board, it settles everything down a bit.”

Campanelle’s trainer Wesley Ward said: “I was watching from the box. It was tough to tell with all those horses. I was just elated it was such a big performance. I am very proud of her.

“The race went just as we hoped. She jumped well, and those on the speed have been doing well because of the weather conditions here. She would have preferred the going a little softer. She was out in front, she ran a beautiful race, and there are no excuses.”

Sam Freedman, co-trainer of Artorius, said: “There was barely a gap there and he poked his head through. He has run a wonderful race. It was hard to see as the near side and the far side were so far apart and I had a bad angle of the TV. I could not tell whether he was third, fourth or fifth.

“I am very proud. The whole team at home has done a really good job. I think they are all up watching. The guys say he will probably stay here for the July Cup. The track is little bit different to Ascot but it is a stiff finish again.”

Henry Field, part-owner, added: “That is the style of the horse that Artorius is. He didn’t quite get there, but the trip away has done him the world of good. Sam Freedman is one of the most astute young trainers I have ever come across. Anthony [Freedman] and Sam have done a wonderful job with him. “He could not have run any better, and he has made us very proud. We would love for Australia for him to have won, but there is no question it was the run of the race. So as long as he comes through the race well, there is no doubt we will run in the July Cup in a few weeks.”