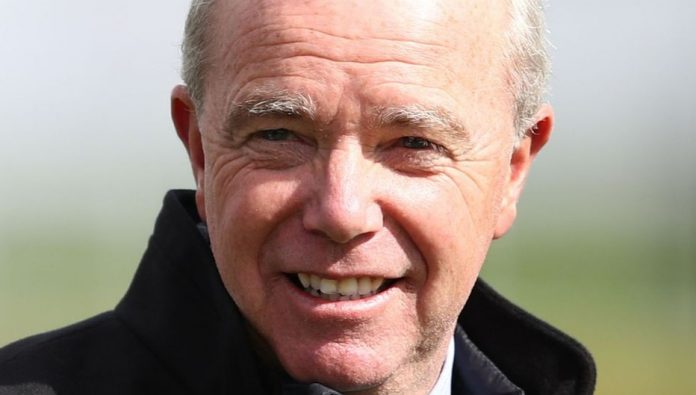 Clifford Lee was full of praise for the in-form Karl Burke team, who continued their fine campaign with victory in the historic £31,000 Stablemate By AGMA Carlisle Bell Handicap this afternoon.

The race may be an 0-85 handicap in racing terms but it has plenty of historical significance and offers up the oldest sporting trophy in the world to still be contested in the form of the 423-year-old Carlisle Bells, which date all the way back to 1559.

Burke and Lee have enjoyed a fine campaign together so far, with the yard providing the Jockey with his first ever Group winner with El Caballo in last month’s Group Two Sandy Lane Stakes at Haydock. And Invincibly (17-2) showed a good attitude to win this race for a fourth time for his trainer here, asserting well after picking up the lead inside the final furlong before going on to score by

Lee was delighted with the performance from the son of Invincible Spirit. He said: “We travelled really well and felt like we were going off early doors, normally he’s a front-running horse. We just got beat the last day at Windsor and he was very unlucky so we’ve gone one better here.

“He’s very tough and going from the three to the two pole I had a good chance and a lot more horse underneath me and then when I asked him he’s done it well.

Wednesday’s seven race card is a fantastic one and included the £16,000 Consolation race for the Carlisle Bell, which offers plenty of prize money in its own right for those who don’t quite make the cut in the feature.

Local trainer Dianne Sayer has a fantastic record on the level at Carlisle, having recording 12 winners from 72 runners on the Flat over the past five years here and she extended that fine strike rate to 13 today withJackhammer (11-1), who showed a fine attitude to battle home and win the contest for the second time in the last three renewals.

The eight year old is in fine heart at the moment, recording his third straight victory across both codes since April, and the winning trainer was delighted to have another winner on Carlisle’s big day.

Sayer said: “He’s been running well for us over hurdles and at the start of the year we were struggling to find a rhythm and find races for him, but then he dropped into it at Perth and we had a nice couple of wins up there. The owners are on holiday so we thought we’d come up to Carlisle! He’s been a great horse for us so we’re delighted.

“It’s fab because it’s always been an ambition of mine to have a runner in the Bell, we keep not quite getting there with Jack but I don’t mind coming into the Consolation race! It’s nice to be here and be a part of it, Molly and the team do such a brilliant job and Carlisle is always so welcoming. It’s our local track so family and friends are able to make it so we love to support the track.”

Meanwhile, the Kevin Ryan team could have another nice two year old prospect in the form of Washington Heights (4-1), who impressed when taking the opening Scaleby Restricted Maiden Stakes over five furlongs by a head under Kevin Stott.

The son of Washington DC caught the eye when fourth on a luckless run on debut at Wetherby earlier this month and his trainer was enthused with his latest juvenile winner at the track – who follows in the footsteps of the likes of Hello Youmzain and El Caballo, who both won here at two.

Ryan said: “It was a lovely run at Wetherby and he’s improved for it as he’s quite laid back at home and he’s obviously going to come on a lot for that fitness wise too, so we were hoping today that he was going to run a big race again.

“Obviously you don’t know what you’re going to meet in these races but Hello Youmzain won his first start here and he went on to be a Group One horse – so you never know.”