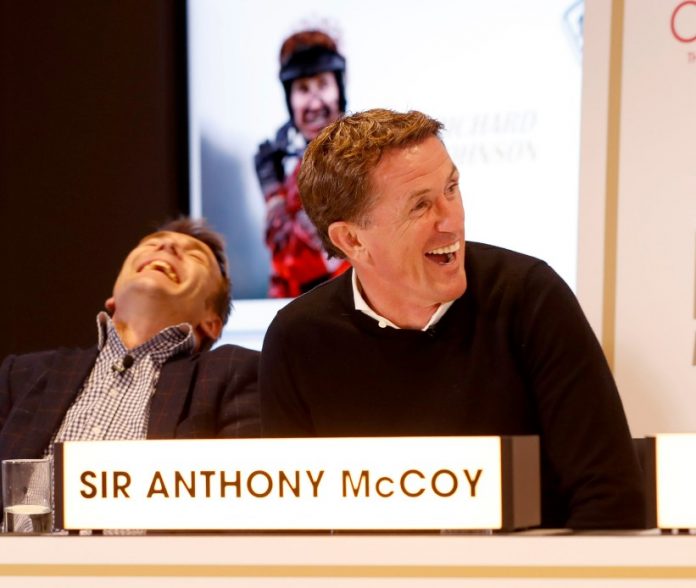 Legendary ex-jockey Sir AP McCoy will be among a host of names from the world of horseracing who will join a paralysed former rider in a charity cycle from Cheltenham to Newmarket next week – in support of two charities who have helped him in his rehabilitation.

Jacob Pritchard Webb was enjoying a highly promising riding career in France when involved in a heavy fall at Auteuil in June 2020. However, the life-changing injuries he sustained have not stopped him living life to the full, beginning careers in both the racing media and the bloodstock world and even embarking on plans to represent Team GB in the Paralympics as a Wheelchair Table Tennis player.

Now the 25 year old has decided to undertake a three-day 140 mile hand bike ride between two Jockey Club racecourses – Cheltenham and Newmarket – in the hope of raising £25,000 each for two charities which have supported him since the accident – the Injured Jockeys Fund and the Matt Hampson Foundation.

And he has revealed an all-star cast from the racing world will be supporting him across the three days, including 20-times champion Jump jockey McCoy.

Pritchard Webb explained: “The training is going well. I’ve got three days now at Oaksey House which should help me keep on top of everything strength and fitness wise.

“AP McCoy is doing the first day, which is brilliant. He’s been a good friend ever since I returned from France. He came to see me of his own accord and had a chat with me and we’ve been friends since. I’ve spent lots of time with him and he’s been very good and supportive of everything and he said he’d do this for me too.

“He’s doing the first day along with Luke Harvey, which is fantastic. I have a lot to thank Luke for because he helped me get the job at Sky Sports and it’s great he can join me on the cycle as well.

“We’ll also have Hugh Nugent on the first day, who’s an avid cyclist and a good friend of mine. We never rode together but we used to work near each other, so we’ve had many a session at the pub together! I’ve asked Tabitha Worsley as well off the back of her cycling challenge for Lorna Brooke last year, so we’ve a great team for the first day!

“Nicky Henderson’s assistant Charlie Morlock is doing all three days with me, which is fantastic and Sean Boyce is going to meet us on the second day and do that with me. Last but not least, Rosie Margarson is going to meet us and do the final day – which will be cycling home for her!”

Pritchard Webb recently marked two years since his accident and believes the milestone is a fitting opportunity to inspire others who suffer serious spinal injuries.

He continued: “It’s kind of bizarre how quickly it’s gone. It feels like it was a lot longer ago that it happened. I suppose I’ve kept myself so busy that it’s just flown by. I didn’t expect to be doing something like this so soon after the accident, but I think it’s quite a good advert really for people who have spinal cord injuries.

“It’s great to be able to show that it’s not the end of the world and life can be good, because I can tell you now that when you’re sat in hospital you think these things. Money aside, I hope it just raises awareness for the charities and also inspires people.”

One of the two charities that Pritchard Webb is supporting is the Injured Jockeys Fund (IJF), of which Sir AP McCoy is the President.

McCoy said: “I wouldn’t like to be doing what Jacob’s doing! I’m not really into biking if I’m being perfectly honest, but I did a 100-mile cycle two or three weeks ago and I haven’t looked at the bike since I did that!

“What I did notice during the cycle was how tough it is for the lads on the hand-cycles. You see signs that say ’70 miles to go’ and you feel tired and then watching those guys do that makes you think, ‘I have little to complain about’. It’s phenomenal and it’s all I kept thinking about and Jacob’s challenge.

“He is an inspiration. He’s a young, good looking lad who had his whole life in front of him before suffering those life-changing injuries but his attitude to it has just been fantastic. I really admire him and he has a great outlook on life because it can’t be easy. We all have down days but in the grand scheme of things, we don’t.

“The IJF costs a lot of money to run each year and is purely run by donations, so all the support we can get is really appreciated.

“Both charities are really important and it’s important we get behind them, but I know times are tough for a lot of people at the moment. If you can’t support us financially, I ask you to come out and join us for a little bit. I promise you it will do anyone who comes and cycles as much good for them as it will to Jacob.”