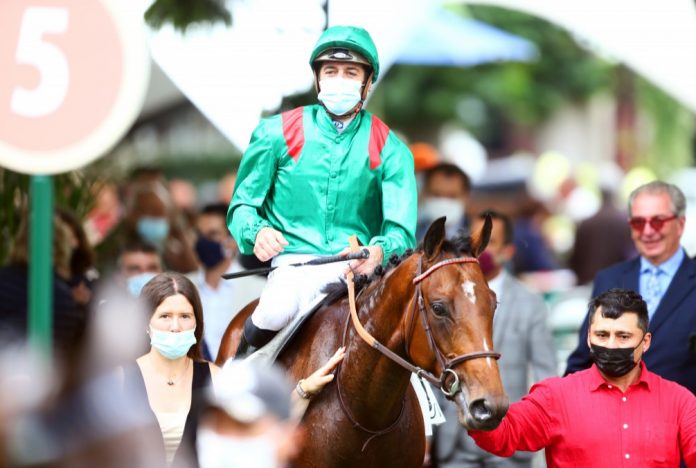 Connections of the hugely exciting Vadeni are looking forward to seeing their charge strut his stuff on foreign soil for the first time, when he takes his chance in the Group One Coral-Eclipse at Sandown Park this Saturday (July 2nd).

The son of Churchill was supplemented at a cost of £50,000 for the race yesterday on the back of his stunning five-length victory in the Qatar Prix du Jockey Club (French Derby) at Chantilly earlier this month, and he looks set to face a mouth-watering field at the Esher venue on Saturday on his first try against older rivals.

Potential opponents for the Jean-Claude Rouget-trained colt, who heads the market at 2-1 with sponsor Coral, include the likes of Group One winners Mishriff andAlenquer, as well as this year’s Irish 2000 Guineas winner Native Trail.

Speaking at on online media conference organised by The Jockey Club Georges Rimaud, Racing Manager to Vadeni’s owner-breeder H H Aga Khan, revealed he is looking forward to seeing how Vadeni fares on the other side of the Channel.

Rimaud said: “Everything is fine and all lights are green as much as we can know or tell.

“The horse worked well at Deauville yesterday and the ground was on what we call Good in France (3.4 on the GoingStick). He had a very nice action and was very pleasant so we decided to go ahead and supplement him as we had planned. Now it’s in the hands of everyone else but me!

“It is exciting and we certainly liked his performance in the French Derby when he impressed us with his turn of foot. Facing the older horses is probably a task but it’s an interesting one and we look forward to it.

“It’s time he got on with it and we’ll be better informed on Saturday evening as to what he’s capable of in terms of an autumn campaign. This is why we wanted to go to Sandown, it is the only race available over this distance in a good time from the Prix du Jockey Club.

“Personally the run at Chantilly didn’t surprise me too much because I knew he was going to use that turn of foot. He’d run in the Prix de Fontainebleau (at Longchamp, finished fifth) over a mile earlier in the spring and his sectionals showed he was capable of doing this.

“We knew he was a good horse and he needed to show it live as you would, he’s shown that now and we were very pleased that he confirmed what we thought about him.”

Plenty of onlookers have touted Vadeni as a key challenger for the Prix de l’Arc de Triomphe at Longchamp in the autumn, but Rimaud stressed that nothing was cast in stone just yet for the three year old.

He explained: “It seems to be a natural thing for French journalists to assume that the Jockey Club winner will be aimed at the Prix Guillaume d’Ornano (at Deauville in August) in preparation for the Arc, but we don’t necessarily know or think that this horse is made for a mile and a half.

“He has a lot of speed and we wanted to stick to 2000 metres (10 furlongs) or a little bit less with the Eclipse. This was very much in our team’s mind rather than going to the Guillaume d’Ornano, which is a Group Two. We felt that we need to keep him at the top level, he’s worth it and the decision was very quickly reached.

“I know he wasn’t entered for this as such but he hadn’t had the performance he put up at Chantilly and it was that run that led us to thinking that he could handle Sandown and the runners who would be in it. I know Jean-Claude always had a great belief in him and we need to exploit this now. Time will tell if it’s a good idea!

“We don’t know if he will manage Sandown but we certainly expect him to. He’s a well-balanced type of horse and he’s always had a lovely action. He doesn’t mind any type of ground and the undulations of Sandown are a bit similar to Chantilly really in that they’re both quite tough in the finish. We hope he’ll be able to handle it and I don’t think it will be an issue for him.

“The Arc is a very different race over a mile and a half against different horses and right now we are not certain that this horse can stay. You’d might suggest that his pedigree says he will as he’s by Monsun on the dam’s side but his sire Churchill is certainly very fast so for the moment it’s not the plan. Obviously things can change and we’ll see how he performs in his races, we may look at something like the Irish Champion Stakes and go from there. He may be entered as many horses are but it’s not the immediate plan at the moment.

“We are celebrating 100 years of the Aga Khan Studs and have a few things planned later in the year. It is an honour to be able to celebrate this and if we have some good winners this year it would be great. It takes a lot of commitment from the owner and I know that his highness is obviously very pleased with how things are going.

“Jean-Claude’s horses are well used to being travelled and I don’t think the trip to Sandown will be too much of a problem. I think he travels over very early on Friday morning and then he can get on with the job on Saturday.”

The Coral-Eclipse is one of the very few major races to have eluded Vadeni’s owner-breeder H H Aga Khan IV, although his grandfather, H H Aga Khan III, was successful three times with Rustom Pasha (1930), Migoli (1947) and Tulyar (1952). The current Aga Khan went closest to Coral-Eclipse success with Kalanisi, the head runner-up to Giant’s Causeway in 2000. Vadeni will be aiming to become the eighth French-trained Coral-Eclipse winner and the first since Javelot back in 1960.

The Coral-Eclipse is the longest-running Group race sponsorship anywhere in the world and 2022 will be the 47th year of Coral’s support, stretching back to 1976. The sponsors are a mission to get their customers closer to the action and new for this year they have created a pioneering virtual race experience in partnership with JockeyCam that will enable racegoers at Sandown Park to experience exactly what it’s like to ride as a jockey in the Coral-Eclipse.

Coral representative Dave Stevens commented: “The presence Vadeni of adds a huge amount of spice to what’s already shaping up to be an absolute cracker.

“We have to go all the way back to 1960 for the last French-trained winner so we are long overdue one. It’s everything we want this race to be as sponsors and we are so excited to have Vadeni coming over.”