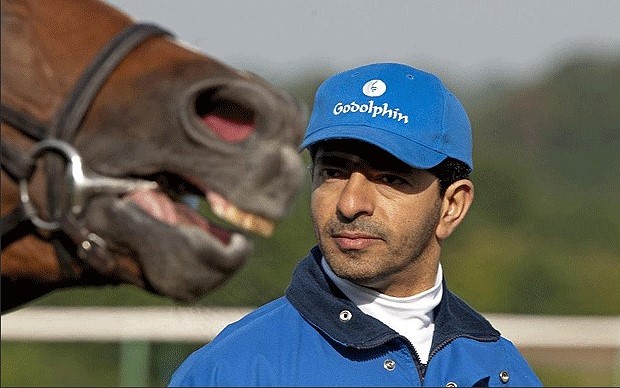 Jockey Hollie Doyle believes Passion And Glory could be a “fun horse for the year” for his connections after continuing her fine run of form in the saddle with victory in the feature Davies Insurance Services Gala Stakes at Sandown Park this afternoon.

All eyes going into the 10-furlong Listed race were focussed on William Haggas’ multiple Group One scorer Addeybb (11-8 Favourite) but it was Godolphin’s globetrotting gelding that was to steal the show and spring a surprise, handing trainer Saeed bin Suroor a record-extending fourth victory in the contest.

Not sighted since finishing fifth in Group Two Dubai Gold Cup at Meydan in March the six year old son of Cape Cross, who has also raced in Saudi Arabia and Germany, was sent off a 5-1 chance to make his first start in Britain this year a winning one.

Racing up with the pace throughout Passion And Glory was sent on mid-race by Doyle to ensure he would not be caught for toe late on. Bringing his guaranteed stamina into play, Passion And Glory stayed on determinedly to defeat the slow-starting Regal Reality by a length and a half, with Addeybb another head back in third.

Doyle said: “It was pretty straightforward. He has got some pretty good form this horse as he been to Saudi, Dubai and Germany in the past.

“Today he was stepping right back down in trip. They said the ground might be a bit quick but he seemed to handle it fine.

“He jumped and travelled well. I just let him use himself with it being his minimum trip as the further he went, the better.

“I was bit worried fitness-wise where he was at but he hit the line well and he has had a good blow so he will really come on for the run. He could be a fun horse for the year.

“I did think that it could be on the short side for him and that’s why I went out to make the running. Rossa (Ryan, on Victory Chime) gave me a lead but I took him on early enough before I got headed and done for toe.

“I was a bit worried maybe I committed a bit soon not knowing how the fitness levels were, but he got away with it.

“From my position not a lot got into but it was a good renewal with Addeybb and there was some good horses in there.

“Saeed’s horses are running well and it is great that he is giving me some rides.”

Despite Addeybb tasting defeat connections were far from disappointed with the run.

Maureen Haggas, wife and assistant to trainer William Haggas, said: “We all know that he is at his best on soft ground but we just want to have him ready for when it rains one day.

“He ran well and when it was obvious he wasn’t going to win Tom (Marquand) just looked after him. He is great and he owes us nothing.”

While Haggas and Marquand might have been out of luck with Addeybb the pair teamed up to good effect with Golden Voice who hit all the right notes on to defy top weight in the Jameson Lamb Half Century Classic Handicap.

After bouncing back from defeat at York with victory over course and distance last time out the gelded son of Havana Gold defied a five pound hike in the weights for that success with a length and a half victory in the seven-furlong event.

Maureen Haggas said of the successful 6-4 market leader: “He did well. Going a nice pace suited him. He is getting the hang of it.

“I think the strong pace helps him though I’m not sure he does more than he has to but he is getting better. He showed a much better turn of foot today so he is learning on the job.

“He has never been an over-enthusiastic horse and sometimes it just takes a bit longer for them to cop on but he looked alright today.

“He is a funny little chap who just doddles along. He is getting better and is going the right way. He hasn’t done much wrong recently.

“I think the stiff seven here suits him well. He settles and everything so there is no reason why he wouldn’t get an easy mile.

“I think you would have to see how he goes but at the moment he wouldn’t be running outside of handicaps. He is getting better with every run so you never know.”

One Nation might have tasted an odds-on defeat on his previous visit to Sandown Park but there was no such misfortune for the son of Dubawi on this occasion after leading home a one-two for trainer Charlie Appleby in the Irish Stallion Farms EBF Novice Stakes.

Sent off the 11-8 Favourite to make amends for his latest defeat the Godolphin-owned colt duly obliged in the seven-furlong contest when mastering stablemate Golden Speech (10-1) by half a length.

Appleby, speaking away from the track, said: “I’m pleased he got his head in front there. He is a horse that is progressing and he is a typical Dubawi.

“He was a little bit unlucky, and probably met a nice filly to be fair last time, but he was the slowest away and we know Sandown is not the ideal place to be last.

“This time William (Buick) got a nice pitch and he did it well. He is very much learning still. I’d imagine there is a bit more to come and stepping up in trip is going to be one of the ways forward as well.

“I was pleased with the second as well as it was marked improvement from the first to second run so hopefully there is a race in him as well.”