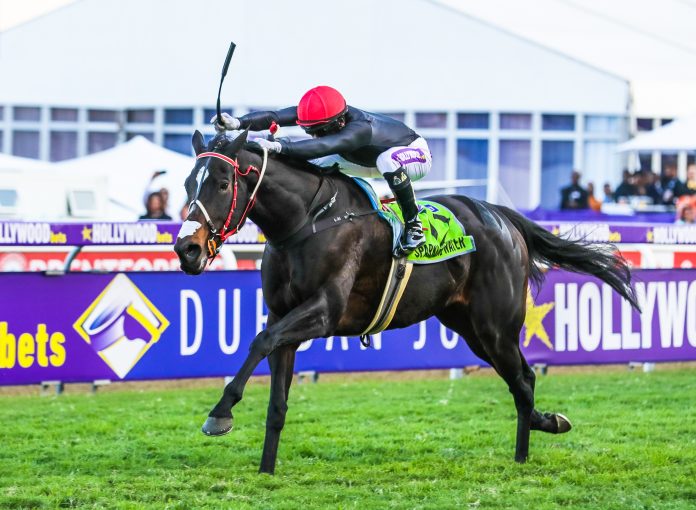 Its been a long journey to South Africa but as many of you will know, it has been my delight over the last few years to remind UK racegoers that there is racing life outside of our beautiful island.

Although I wrote a preview (hopefully some of you read it) , the truth is you cannot do the Durban July justice in advance – I have to wait until the racing is over, make my excuses if I failed to point you in the direction of a winner – and tell the story of the day itself.

Firstly, this will NOT be particularly horse based – thanks to some antiquated restrictions regarding travel and quarantine, we are unlikely to see any animal I mention racing in Europe anytime soon, but that doesn’t mean I cannot try to “sell” you the day out – it is an experience to savour and one for the bucket list of anyone who likes a party and their racing.

A twelve race card starting at 11.50am suggested this would be a war of attrition for the “proper” punter who intended to get involved in every race, but for the racing tourist like me, there is more to the day than just the horses and the betting.

As a background to the day, this is Royal Ascot on acid, and hard as I will try, words won’t do it justice – so thank goodness for cameras.  At a guess I would even go so far as to say the split between racing fans and those there for a day out is 20/80 – this is socialising hard -core and they know how to make the most of the opportunity.

With covid restrictions removed days before the races a full crowd of 50,000 plus descended on Greyville, though an entry fee of just 230 Rand (roughly £11) for the biggest race in Africa certainly puts our tracks to shame. Using this review as an excuse, I also set out to compare drink and food prices (another major bane of racegoers in the UK as we all know), and although I accept wages here are also very different, the fact that I can grab a drink and something to eat for an affordable amount was a pleasant surprise. A hotdog set me back a whole pound, and a chicken strips and chips combo for £2.50, and the choice of chilli chutneys had to be tried to be believed – though that did mean an instant trip to the drinks stand where I quickly needed to sink a beer  that cost me all of £1.75.

Walking around the course and the infield is normally a golf course – but not today. It’s a sea of hospitality marquees overflowing with  party animals in the brightest and most outlandish outfits you can ever imagine (I’ll get some photos), with the music overlapping from area to area, and the MC’s microphone outdoing them all whenever the main stage was called in to action. Fashion is pretty big here as I am sure you know, and there is a decent prize for best dressed in the thousands of pounds. and looking for polite terminology, it seems safe to say there are more extroverts than introverts in attendance. All in all the party goes on, private boxes are left right and centre, and money is not an issue – and the bubbly was flowing freely.

Those who know me will be fully aware that fashion in not my area of expertise, so after a bite and a drink we sat down and focussed on the racing and although I struggled, hats-off to those who found the winners on the afternoon.

Looking at the main race (the Durban July), and like every big race in the World, there is always a story to be found, and today was no exception. Mike de Kock is a trainer many of you will have heard of, perhaps through his exploits in Dubai and elsewhere, and although I was told quite clearly by my South African host that the Cape trained horses held all the aces, Mike never lets things like that get in his way. Watching the race live, I still feel that if Al  Muthana had stayed he would have been involved in the finish, but it was Sparkling Water (16/1)  who didn’t only win it – she came home three lengths clear. Sitting near the bottom of the weights, the daughter of Silvano out of a Dansili mare strolled home under S’manga Khumalo, in what we all expected to be a far more competitive renewal. Watching live, the major players had no obvious excuses with the top eight or more fanned across the track with clear air in front of them, which only makes this performance all the more noteworthy. Owner Mary Slack is part of the Oppenheimer dynasty and fingers crossed, she may decide to bring the winner to Royal Ascot next year, though as mentioned that is currently a huge task until the quarantine laws are changed (which may happen soon with any luck).

I ought to at least mention the Garden Province  Stakes (sponsored by Brentford FC), if only because I was keeping an eye on Under Your Spell, who is shortly heading off to the Harry Eustace stable in Newmarket, and up against the horse that many see as the best in South Africa (Captain’s Ransom). She ran a respectable if not overly inspiring race back in sixth, to and she will need to be very carefully campaigned in the UK to stand any chance of winning a race.

And so, the day eventually drew to a close, and a room of exhausted journalists finally packed up the laptops, cameras, and whatever, to travel back to the hotel, ahead of a very long journey home, bit it was worth it. As a country, South Africa is fascinating, the people welcoming, the food outstanding, and the racing competitive. We were lucky enough to witness a spectacular race with an above-average winner, been greeted like long lost friends by strangers from all walks of life, and seen people dressed in creations I could never have even imagined – Royal Ascot and the Goodwood car park picnics will never seem the same again…

Hitting more woodwork than a lumberjack but we go again at the TPC Sawgrass!

Today’s Ratings and Scribblings for Sandown, Doncaster and Newbury – 22/07/21