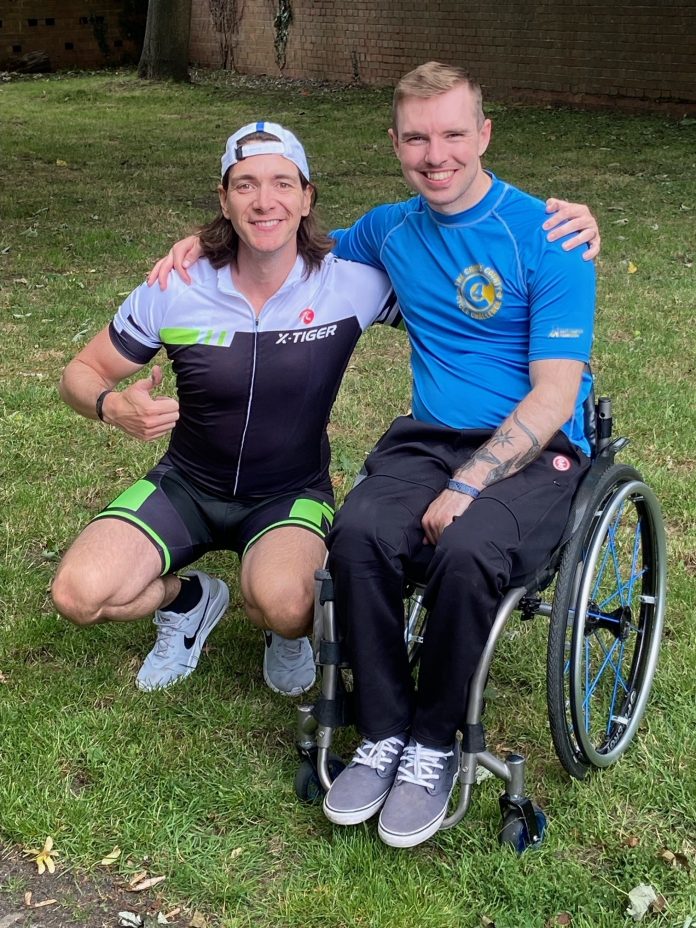 A paralysed former jockey who is taking on a mammoth cycling challenge in aid of two charities that helped in his rehabilitation was joined by a Harry Potter star on Sunday (July 3rd) afternoon, as he steps up his training for the big event.

Jacob Pritchard Webb was enjoying a highly-promising riding career in France before a fall at Auteuil in June 2020 left him with life-changing injuries. However, it has not stopped him from living life to the full and he is undertaking a three-day 140 mile hand bike ride, which begins on Thursday (July 7th).

The 25 year old will be riding between two Jockey Club racecourses – the home of Jump racing, Cheltenham, and Flat racing ‘Headquarters’, Newmarket – in the hope of raising £25,000 each for the Injured Jockeys Fund and the Matt Hampson Foundation, two charities which have supported him since the accident.

As part of his training for the event, Pritchard Webb was joined on a cycle around the Cotswolds on Sunday afternoon by Harry Potter star James Phelps, who played Fred Weasley in the movie franchise.

Phelps explained that he met Pritchard Webb through the Matt Hampson Foundation and he was more than happy to offer his assistance.

He explained: “Like all good things, it came about over a beer! We met each other at Mike Tindall’s golf day earlier in the year and we got speaking about Jacob’s challenge. I’m a big cyclist myself and it sounded a lot of fun.

“Originally I was hoping to do all three days but I’m working in the States now. I was still keen to get out with him though and that’s what we did on Sunday.

“We found somewhere roughly near where he’d be starting from in the Cotswolds and did about 20 miles. It was a bit more uphill than I was expecting at times, but Jacob was incredible. Literally every cyclist that went past – and there were quite a few of them – almost all tipped their hat to him and said fair play as it was rough going up those hills on a hand-bike! It just shows how inspirational he is.”

When asked about Jacob’s challenge, which will culminate on Darley July Cup Day at Newmarket on Saturday (July 9th), Phelps added: “I think he’s an absolute lunatic personally! It would be a challenge for an able-bodied person on a normal bike, so to do it on a hand-bike is even more impressive.

“When we were riding yesterday he was kind of having to remind himself that it’s not a time trial and it’s all about getting it done, but his physique seems to have changed since I first spoke to him a couple of months ago so I think he’ll be fine.

“I asked him yesterday how long it had been since his accident and he said it had only been two years. To be doing this now in a relatively short space of time is incredible and I’m gutted I can’t be there.”

Pritchard Webb will be joined by a host of star names from the racing world on his charity bike ride, including 20-time champion Jump jockey Sir AP McCoy, and he revealed that Sunday’s ride was his final piece of work before undertaking his challenge.

He explained: “It was tough! One hill was the full elevation, so it just went on for what felt like forever, but it was good practice.

“My brain tells me that I’m not allowed to stop and I need to finish as quickly as possible and I think I just need to get out of that mind-set. The whole challenge is to complete it and it’s not about the time, so I’m learning to pace myself.

“It was great to have James along on Sunday and it’s a shame that he can’t join us for the full event. He’d have found it a doddle as he’s an absolute beast – as I found out yesterday! He wanted to still be involved and we found this date in the diary that worked for both of us to go out on the bikes together. James chose the route and off we went.

“I’m both excited and nervous for Thursday now. I’m looking forward to the rest I’ll get now in the next couple of days and I’ll be taking on lots of carbs.”

Pritchard Webb is well on course to raise a substantial amount of money for charity through his challenge and while he recognises that not everybody is able to donate money at the moment, he would love anybody who is keen to join the ride to dust off their bikes and get in touch.

He said: “Anyone can join us if they want to, it’s an open invite. Sean Boyce (a presenter on Sky Racing) is joining us on the second day and it’s the more the merrier. If you’d like to join in, feel free to drop me a tweet and I’ll let you know the route and you can meet us there.”

The Ratings and Scribblings for Goodwood, Newmarket and Musselburgh – 30/07/21