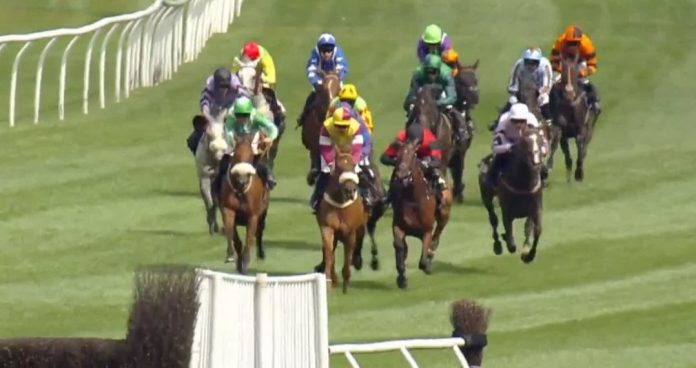 Trainer Peter Bowen gushed that he would be giving Francky Du Berlais (5-1 Favourite) a well-deserved holiday, after he became the first horse to win the Unibet Summer Plate Handicap Chase twice. In the process the nine year old provided Bowen with a record-extending eighth success in the Grade Three contest – a quarter of a century after his first victory with Stately Home (1997).

It appeared Francky Du Berlais would have to settle for second place behind the Jonjo O’Neill-trained La Domaniale (8-1), who looked the winner for a long way in the famous yellow and green JP McManus colours.

James Bowen kept his cool on Francky Du Berlais however, who stayed on strongly to score by a neck in the final strides and win the £55,000 contest for the second year running.

Bowen’s stunning record in the Grade Three contest is made all the remarkable by the fact that it is an 11-hour round trip for the trainer to Market Rasen from his yard in Haverfordwest, south west Wales. And while he couldn’t quite put his finger on the secret to his success, he did reveal that his charged had earned a break.

Bowen said: “He’s had a good prep for it and we’ve had no hitches along the way. He likes a strong-run race and that just suited him ideally. Don’t forget that he won over three miles in April so he was always going to get the trip well.

“I think the last time he ran at Uttoxeter, the three miles and two furlongs stretched him a bit, but today’s sort of trip is ideal for him.

“God only knows what it is about this race! It could be that we have the right sort of horse, that’s the eighth time. You can’t really put a finger on it why, it’s like the Topham. They jump their fences well and he jumped particularly well today and the other horse (Statuario, 10-1) ran a blinder to finish third as well. He’s run a good race and his turn will come before long.

“We’ll probably give Francky Du Berlais a little break now and then he’ll probably have a spin over hurdles before going to the Grand Sefton (over the Grand National fences at Aintree), he loves his jumping and he loves Aintree. He deserves a holiday now though.

“Obviously it makes the drive home easier, it took us eight hours to come here yesterday with all the traffic. He travelled well and slept all the way I think!”

Meanwhile, jockey James Bowen became the first rider to win this race more than once for his father, beating his brother Sean to the accolade in the process.

He said: “They’d gone a good gallop up front but I expected mine to travel up better, it was hard work at one stage but he’s come home really well. He’s a star and he’s been such a good horse for the yard. He’ll carry on going up in the weights but he always gets his day in the sun.

“They went a good gallop and he was a bit rushed off his feet early on, but he got into a rhythm and seemed to get his confidence when passing a couple. He’s absolutely flown home so he’s a good little horse.

“My dad’s been through a lot of jockeys before us! Sean has won it before and it was his turn this time but he couldn’t get past me!”