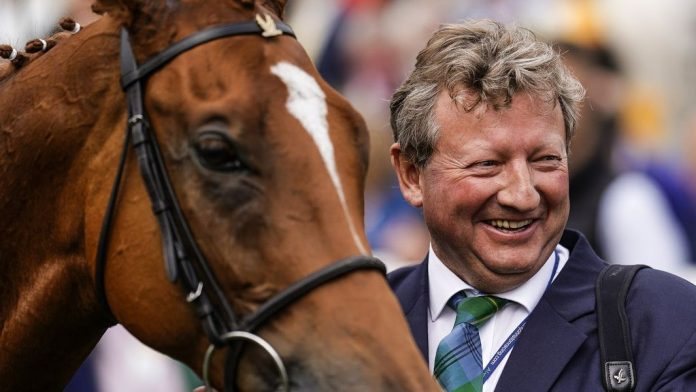 Successful on debut over today’s course and distance 41 days ago, Dance In The Grass was slightly slowly away from the stalls as outsider Ipanema Princess (66-1) made the running. Entering the final furlong, the winner and Godolphin’s Fairy Cross (3-1) pulled clear to fight out the finish. After a sustained duel, it was Dance In The Grass who came out on top by three-quarters of a length to earn herself a quote of 25-1 for the 2022 QIPCO 1000 Guineas with Betfair.

Last year this contest went to subsequent dual Group One heroine Inspiral and a step up in both class trip now beckons for Dance In The Grass, who is trained by Charlie and Mark Johnston and races in the colours Jaber Abdullah, with the Group One bet365 Fillies Mile at Newmarket (Friday 7th October) a potential long-term target. When the sole licence holder, Mark Johnston previously enjoyed Star Stakes success with Fireglow (2015) and Walk In Marrakesh (2019).

Mark Johnston said: “She overcame a relatively slow start but they went very, very fast. I was panicking a wee bit as to what sort of position she would get round the bend and how wide she would have to travel but Silvestre kept her head and got round the bend before he set off after them. It has worked out well.

“Silvestre was on her last time when she won on faster ground and said although it was hard to compare the two races he felt she would be better on the faster ground as she picked up nicer on that whereas today she was just struggling to get her feet out a bit. That all augurs well for the future.”

As regards to future targets, Johnston continued: “She is obviously going to step up into Group races now. Off the top of my head you would say the Fillies’ Mile is the long-term target but this is very much Charlie’s department at home now – he can juggle it all in his head with all the different horses and all the different races so I very much leave a lot of that to him.

“Charlie earmarked this race for her straight after her debut – he got that much right so I’ll leave the next step to him as well!

“I think there is no doubt whatsoever that she would get the mile but at the same time she has won twice at seven furlongs. Today they went at breakneck speed and she has managed to stay in touch and get there OK.

“She was quite backward and early on we didn’t think we’d be running at this level at this time of year. Although we only have three horses by Cracksman, the other two are a bit similar. Both this filly and Crackovia, who has also run already and won already – if you looked at them early in the spring you have said they were going to be slow-maturing, late two year olds who you would not see the best of until they were three. So everything this year is a bonus I hope.”

Hexham in the mud, the joys of winter!