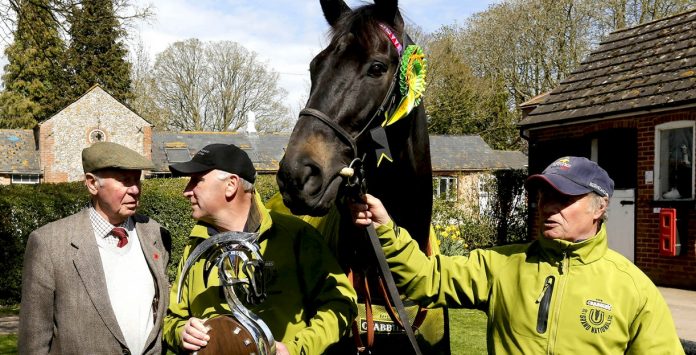 Local children are being given the opportunity to attend a free riding school at the iconic Aintree Racecourse during the summer holidays, thanks to the support of the family of one of horseracing’s most famous owners.

The Jockey Club is working with the Toxteth-based inner-city riding school Park Palace Ponies to stage the Trevor Hemmings Learn to Ride Summer School, a pop-up service at the home of the Randox Grand National Festival for six weeks, running from today (Monday 25th July) to Sunday 4th September. The scheme is for children aged between five and 10 years old who will receive free riding and pony care sessions, as well as behind the scene tours.

The school is being funded by the charity foundation of the late Trevor Hemmings, whose famous yellow and green chequered colours were carried to victory in the Grand National a joint-record three times courtesy of Hedgehunter (2005), Ballabriggs (2011) and Many Clouds (2015). Hemmings died aged 86 in October 2021.

Parents are able to book slots for their children on a week-by-week basis, providing them with both healthy meals and free holiday club provision throughout the summer holidays.

A handful of older volunteers from Park Palace aged from as young as 11 all the way up to people in their 60s are on hand to help with duties such as tacking up and mucking out the ponies.

Park Palace Ponies has grown rapidly since being founded five and a half years ago by Bridget Griffin and speaking at a launch event for the riding school at Aintree on Friday, she could not hide her delight at being able to offer the service for another year.

Bridget Griffin said: “After the success of the riding school 12 months ago, we’re absolutely delighted to be back at Aintree and even better than before. Opportunities like this are so important for local children and having catered for around 120 kids a week last year, we’re thrilled to be able to ramp that up this time around.

“The benefit that horses can have is magical and anyone who has spent time with horses or ponies will know the effect that they can have to both mental and physical health, especially for children. It can help socially and emotionally, so it can help in such a plethora of ways and have a lot of impact.

“It’s massively important to have the Trevor Hemmings Foundation on board and it’s very simple, we couldn’t do it without them. We put on two free projects during the summer – one at our site in Dingle and one here at Aintree – and without the Foundation there’s no way we could do it so we’re so thankful to them for doing that. It’s really special to be a part of Mr Hemmings’ legacy.

“There could be kids that ride here and go on to be jockeys, or even win the Grand National one day! There’s no reason why it can’t happen and we’re so thankful to Aintree and The Jockey Club for having us.”

The riding school also has the backing of world champion boxer and Liverpudlian Natasha Jonas, who is an ambassador for The Jockey Club and a champion of creating more opportunities in sport.

The 38 year old, the first British female to box at the Olympics, has first-hand experience of the importance of this, having only started boxing in her twenties. She has since gone on to be crowned the WBO female junior-middleweight champion at Manchester Arena in February and cannot stress enough how important schemes like this are for inner-city children.

Natasha Jonas said: “If your parent doesn’t drive and you’re an inner city kid, you don’t have access to horses and you won’t even see a horse. You’d never dream of seeing one except for on the TV so to be able to come down and get on one and see the history behind Aintree is fantastic and really great to see.

“Creating opportunities and giving people as many different perspectives as possible is what it’s all about. I’m testament to that, I never wanted to be a boxer and actually started out in football – I kind of fell into it and that was just because of an opportunity that I took.

“As a sports person I genuinely believe that there’s a sport out there for everyone. Not every kid wants to run 100 metres or get punched in the face, there’s other things to do and it’s only through having a go and experiencing different things will you find a passion.

“There’s also a huge mental health benefit to this, as animals have such a calming and soothing effect on people and the help that they can give is massive. There are kids that are still suffering from the effects of Covid and lockdowns and things like this can only help that.”

Dickon White, North West Regional Director for The Jockey Club, added: “We’re thrilled to once again be teaming up with Park Palace Ponies, continuing what has become a fabulous relationship between the charity and Aintree Racecourse.

“Last year’s riding school proved to be an unreserved success and we’re excited to be able to step things up this time around and offer even more children the opportunity to get involved with the ponies.

“It’s fantastic to be able to help by offering local children what we hope will be an unforgettable experience, spending time with ponies and riding at the home of the world’s most famous horse race.

“Of course, none of this would be possible without the help of the Trevor Hemmings Foundation and I can’t help but feel that it’s fitting to see the legacy of Mr Hemmings carried on at a place which meant so much to him.”

How to ruin racing by overwatering!