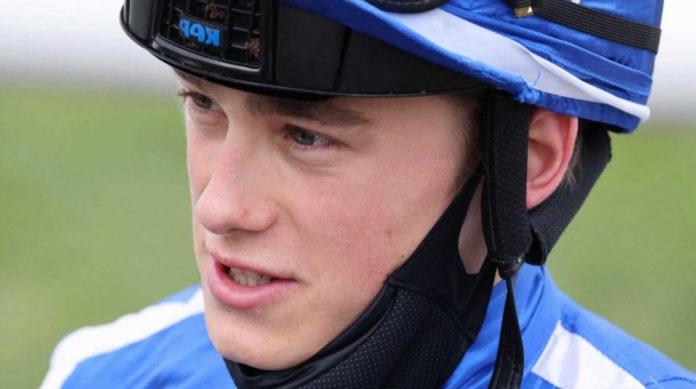 The son of Golden Horn disappointed when sent off joint-favourite for last month’s Duke Of Edinburgh Stakes at Ascot and had been beaten at Newmarket subsequently but, aided by a first-time hood, proved a completely different proposition.

The winning margin was a length from the in-form Bague D’Or (4/1), with third-placed Euchen Glen (20/1) unlucky not to finish closer having met trouble in running.

De La Sayette said: “The plan was to go to post as slow as possible, which he did, and the hood obviously helped out a big deal because he was quite gassy at Newmarket. The hood did a brilliant job to relax him. I had a good tow during the race, then pulled him out, and he stuck his head out to the line.

“Golden Horns tend to just gallop. I won on a filly by Golden Horn yesterday [Caius Chorister] and they just seem to get better with age. This lad has taken a bit of a while to learn the ropes but you saw it today.

“The boss and Thady and all the assistants have done a wonderful job of preparing him at home. I’ve been riding him for the past week and he’s such a gentleman of a horse. He looks after you in the morning and it’s just an honour to ride him in the afternoon, and for him to be exactly the same as he is at home.”

On how his own season is going, he added: “It is unbelievable to think that this year has flown as smoothly as this. I am just overwhelmed with how things are going at the minute and hopefully they carry on.”

Thady Gosden said: “Benoit is riding very well, as he always has done. Trawlerman is a horse who is not the most straightforward – he is over generous. He leans on the rider a bit and doesn’t give them much of a chance usually. Obviously, he had the hood on today, which helped him a lot, but Benoit gave him a great ride. Every time he felt a horse coming to him at the end, he pulled out a little bit more.

“We were trying to run him in a race that had a big enough field to try and get him settled. We will see where we go from here. He’s a horse with plenty of talent, but he hasn’t quite been able to show that so far this year.

“He is such a genuine horse – he gives you everything when you ask for it. Hopefully [the hood] relaxes him a bit and lets him show the quality that he has.”

Neil Callan said of the runner-up: “Bague D’Or has run well. He has stepped up the ladder quite well in lesser races and this was his biggest test so far. He is only a lightly raced four-year-old, so I still think there is plenty of improvement to come.”

Euchen Glen’s rider Paul Mulrennan said: “He is a legend and Jim [Goldie] does great with these horses. He has run a hell of race. With a clearer run I wouldn’t have been far away, but when you are riding a horse cold and trying to find the gaps….”